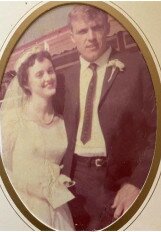 Francine Ann Cahoon was born on January 5th, 1940 in Coventry, Rhode Island and passed away on August 24, 2022 in Rockledge, Florida. Francine was raised by loving parents Claire and Eugene Levesque along with her three siblings Yolanda, Claudette, and Denis. She graduated from Coventry High School in 1957 and shortly thereafter met the love of her life, Daniel V. Cahoon. After a whirlwind courtship of approximately 4 months, they married on October 22, 1960.

Fran and Dan bought their first home in 1961 in Coventry, Rhode Island and started their family. Four boys Dan, Jim, Steve, and Troy came along from 1962 thru 1966. Although Francine was a petite, soft spoken lady, she raised four rambunctious sons as Dan was often on the road as a truck driver. She was a kind, loving and caring mother and spouse. Speaking for her sons- she was also a great cook and loved cooking for her boys.

In 1976 the Cahoon family packed their bags to start a new adventure and relocated to Orlando, Florida. After two years in Orlando, they moved back to Coventry, Rhode Island where they lived until 1983. Being a dedicated wife, in 1983 Fran once again packed their belongings and headed back to sunny Florida where they bought a home in Malabar. Here they enjoyed 2 acres, a pond and hosted many family gatherings for the next 20 years. Now back in Florida Fran enjoyed fishing in the Indian and Banana River as well as the beach.

Once she was ready to retire, around 2004 Fran and Dan moved to Barefoot Bay in Micco where they resided until after Hurricane Francis did significant damage to their home. At this time, they relocated to Rockledge, Florida in a home that she shared with her husband Daniel until he succumbed to Alzheimer's disease in 2021. Always the dedicated and loving wife, Fran was the primary caretaker as Dan declined with his disease. They had been married for more than 60 years.

Fran moved to an assisted living facility in Melbourne where she enjoyed a mostly care-free lifestyle and had many visits with her children where they often treated to dinner out and played digital slot machines at a local establishment. Fran had been diagnosed with lung cancer 5 years ago and finally succumbed to complications from the disease on August 24, 2022. She will always be remembered as someone who cherished her husband, her family and her friends.