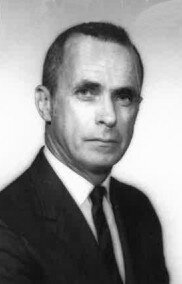 Obituary of Hubert B. Mockler, Jr.

Born October 14, 1920, in Colerain, Mass., to Hubert B. and Ora L. Mockler. He received his high school diploma from Arms Academy in 1938, then attended Northeastern University where he majored in Electrical Engineering. He left college in his junior yeah to join the war effort, entering the Army Air Corp in August 1942. During World War II, he served as a Norden Bombsight Specialist and a bombardier instructor in the Second Air Force statewide and in the Fifth Air Force in Australia, New Guinea and the Philippines.

During the Cold War ere, he served in the Strategic Air Command in long range reconnaissance aircraft involved in Electronic Counter Measures.

At this time, he was selected as a candidate for Advanced Bomb Navigation School at Keesler AFB where he graduated as Honor Student in a class of 132. This allowed him to select his choice of duty stations, and he chose to work at the Joint Long-Range Proving Grounds which subsequently became known as Patrick Air Force Base. He was involved in many of the early missile programs as guidance and flight control specialist, and as such, was placed in a small group of "Mission Critical" personnel who were from from shipment worldwide. He remained at Patrick AFB until his retirement in September 1965 after 23 years of service. He also held a commission as a Captain in the Air Force Reserves.

After retirement he worked for Dow Chemical Company Aerospace Division as a Project Manager of reactivation of Launch Complex 34 in support of the Manned Apollo Program. Later he worked for the Bendix Aerospace Divsion as Manager of the Space Craft Test Support Group at Kennedy Space Center for the SATURN V Program.

Upon termination of the Saturn Program, he worked for several local electrical contractors as a Master Electrician in commercial and industrial applications. He finally retired for good in 1994 at the age of 74.

He was a member of the Melbourne Lodge #143, Free & Accepted Masons, the Orlando Consistory of the Scottish Rite and the Bahia Shrine Temple in Orlando.

Hubert touched many lives on his journey through life. The ones he was most proud of were the Disabled Veterans of Chapter 123 loocated in Merritt Island. Through his generous donations he helped many veterans. We were all grateful and in awe of his intellect, his fine wit, his love of life and is dedication and service to his country and his fellow man.

Hubert's and Betty's ashes will be interred with military honors at Cape Canaveral National Cemetery on September 2 at 1:00 P.M. The family wishes to welcome anyone who would like to attend this honorable event.

Share Your Memory of
Hubert
Upload Your Memory View All Memories
Be the first to upload a memory!
Share A Memory