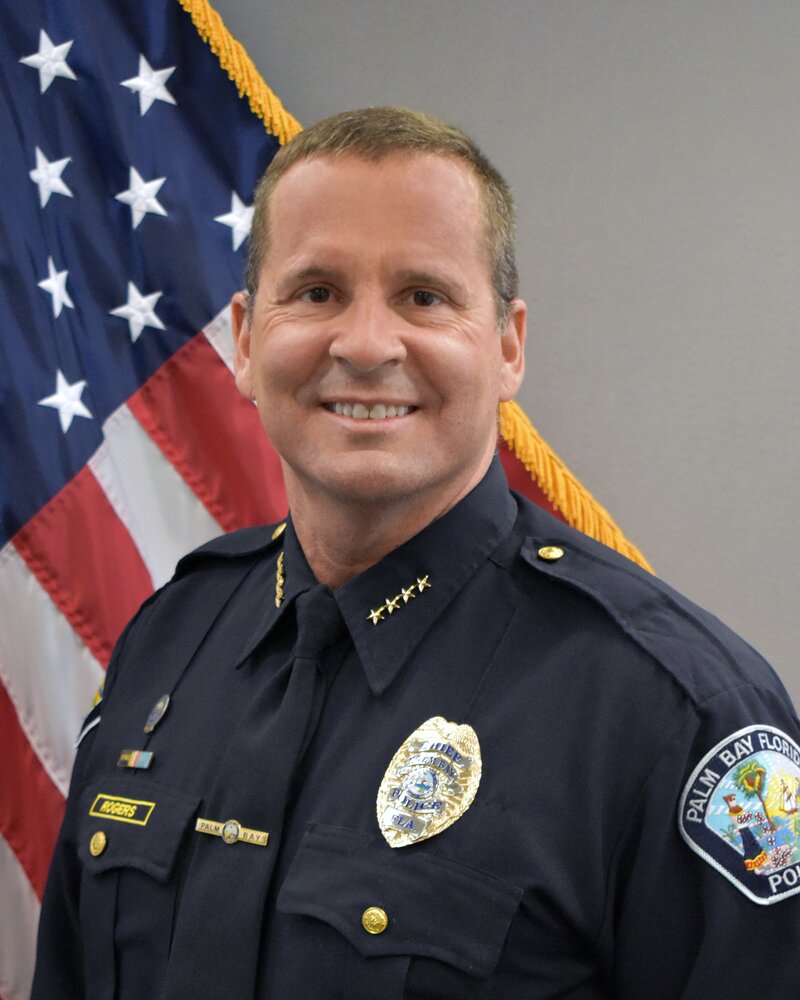 James Thomas Rogers, 59, of Palm Bay, passed away on March 13, 2022. Jim was born on September 13, 1962, to Jacqueline and James Rogers in Wisconsin Rapids, Wisconsin. He grew up in Steven’s Point, Wisconsin where he graduated from Pacelli Catholic High School. After graduation, Jim started his lengthy law enforcement career at Wood County Sheriff’s Department as a deputy. While on vacation in Palm Bay, he made the decision to move to Florida and later became a police officer with the Palm Bay Bay Police Department in 1987. During his time at the department, Jim spent time in Patrol, Criminal Investigations, Professional Standards, Youth Services, and the Communication Center. He was also a 15-year member of the SWAT team serving five of those years as the SWAT commander. He worked his way through the ranks serving as a Sergeant, Lieutenant, District Captain, and Deputy Chief. In 2017, he was appointed Chief of Police and served that role with pride for two years until he retired in 2019. His leadership, professionalism and compassion for others was certainly felt by everyone who knew him. He was a mentor to many at the police department. He was also instrumental in developing positive relationships within the community through outreach programs and building trust between the Palm Bay Police Department and the public. He was a graduate of the F.B.I. National Academy and Southern Police Institute. He held a Bachelor of Science degree in Criminal Justice Administration and a master’s degree in Political Science.

In 1989, he met Melissa, and they wed in 1990 going on to have 2 children, Kellen and Joel. Jim is predeceased by his parents, Jacqueline and James Rogers. He is survived by his loving wife Melissa, his beloved sons Kellen, and Joel (Mishella), his sisters Lori Jakusz (Toby), Staci Suchoski (Chris), Kathi Chojnacki (Alan), Lisa Olig (Doug), Shana Kizewski (Jeff), and multiple extended family members.

A Celebration of Life for Jim will be held Saturday, March 19, 2022 at 1:00pm at Centerpointe Church located at 891 Coply St SE, Palm Bay, FL 32909. The service is open to the public. In lieu of flowers, the family requests donations be made to the Palm Bay Police Department CISM Team.

Share Your Memory of
Chief James Thomas
Upload Your Memory View All Memories
Be the first to upload a memory!
Share A Memory