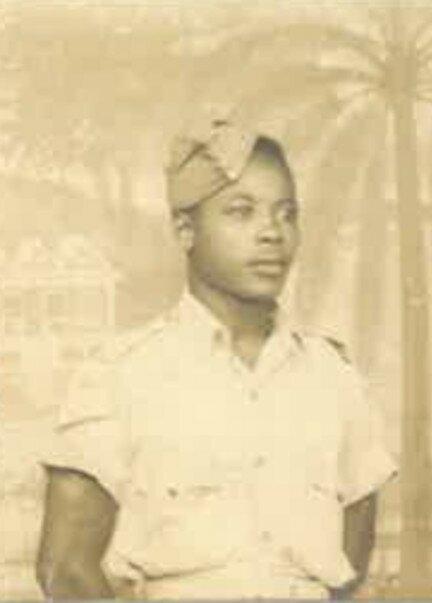 Over one hundred and one years ago on August 16, 1920, in the picturesque seaside village of Speyside on the Caribbean Island of Tobago, a baby boy was born. He brought joy to the hearts of a young couple, Muriel Stewart and Nathaniel Perry who gave their firstborn child the names Elton, Anstay.

Anstay, as he was fondly called, spent much of his childhood in the bakery which was owned by his relatives, the Spencers. There he developed the skills and love for baking. Knowing the Tobagonian culture, we can be sure that he had the respect for elders, and the importance of a healthy work ethic poured into him during his formative years. He grew up in the Anglican church where a love for Jesus and an interest in spiritual things would have been nurtured.

Young Elton Anstay Perry enlisted and proudly served in the British Regiment during the Second World War from 1940 to 1946. One day while on leave he was traveling on a train from Port of Spain, the capital city of Trinidad to San Fernando, the second-largest city. This handsome, well-attired gentleman met and initiated a conversation with an attractive young woman. At the end of that journey, she asked him to assist her with her luggage; he willingly obliged. She lived a short distance away from the train station so he accompanied her to her home. After visits between them both and several conversations, she visited his hometown in Tobago to meet with his family and is a true mid-20th-century style he wrote a letter to her parents to ask for her hand in marriage.

On December 15, 1946, Miss Inez Charles became Mrs. Elton Perry. Their loving union saw the birth of their first son, Charles, and thereafter siblings Russell and Wincliffe were born. Marjorie was the last child and only girl to join the Perry clan.

Anstay was a disciplinarian, but he was also a very kind and caring father. Together with his wife, Inez, they guided their children to be kind, good-natured, and God-fearing youngsters as they instilled in them the attributes of decency and integrity. Being the father of three creative, energetic boys his principled stance on matters served him in good stead to firmly correct his sons whenever necessary, and yet, his compassion could surface when his daughter needed consoling.

After 21 years of marriage filled with the usual joys and sorrows, his faithful wife became ill and subsequently died. Heartbroken, yet focused, he was able to navigate the turbulent waters of single fatherhood with three sons who were barely entering young adulthood, and a daughter, not yet a teenager.

At the time of his wife’s death, Mr. Perry worked at Trinidad Leaseholds Limited, which became Texaco and then renamed Petrotrin. After her death, he migrated to the US in the early 1970s and settled in Western Massachusetts where he worked at several companies. In 1990 he retired from The United Technologies- Pratt and Whitney Aircraft in East Hartford Connecticut. He was a dependable, respectful worker who believed that a job worth doing was worth doing well and he never cut corners to achieve a desired result.

Daddy Perry provided a solid role model for his children, their offspring, relatives, coworkers, and friends by always doing things by the book, He followed the rules and ensured that he was always on the correct side of the law. But most importantly, he tried his best to follow the laws of the Most High Creator, God. Although his beloved wife was a Seventh Day Adventist, he didn’t join the church in baptism until the fall of 2014. Even though his church attendance was not regular, he loved the Lord and regularly read his Bible.

Always a lover of the outdoors and gardening, the children noted that there was never a time when he didn’t have a kitchen garden. Moving to Florida upon retirement gave him the perfect opportunity to become a full-time gardener. He only slowed down in the fall of 2018 but up until a few days before his death, he was still giving instructions about work to be done on some shrubs in his backyard. He continued to use his baking skills right up until the pandemic struck.

He kept up to date with current affairs and kept his mind sharp by looking at shows on The Science Channel, PBS, The Smithsonian Channel and found entertainment with Turner Movie Classics. He maintained his mental clarity right up until the end and he was able to recount dates of both major family and world events.

Daddy Perry was loved by his sons and daughter and their families and his siblings and they all understood and appreciated his candor and brutal honesty. He didn’t “beat around the bush” as he would say. He may not have been always politically correct in his pronouncements but you knew where you stood with him and how he felt about situations, you didn’t have to guess.

On February 18, 2022, Daddy Perry, Elton Anstay Perry quietly departed this life at his home in Palm Bay, Florida after succumbing to a stroke. His children Charles, Russell, Wincliffe and Marjorie will always cherish the memories of their dad, a source of strength, comfort, support, protection, and yes, the keeper of discipline after their mom died. He provided needed boundaries to keep them safe and free from harm.

Pam and Selma’s gratitude to him for providing their life partners has been acknowledged by their visits and the kind deeds they did for him, including providing tasty meals for various celebrations.

His grandsons Xavier and Thomas and his three great-grandchildren, Brandson, Orion, and Makida get bragging rights that their grandpa/great-grandpa was a centurion.

Anstay’s four sisters, Gladys Winsdor, Edith Cordner, Adisha Perry of Tobago, and Petlyn Warner of New York, his brother Brathwaite Perry of Tobago, and Sister in law Venice Wilson of Springfield Massachusetts, will fondly remember their big brother who left a legacy of integrity and honesty.

As an uncle to Bernedette Wilson of New York, Agatha Lee of Trinidad, Lenroy Wilson, Peter Wilson, Hendriks Wilson of Trinidad &Tobago, and Rodney Wilson in Georgia he represented a benevolent father figure, even though from a distance.

Other relatives include the Hercules, Lees, Spencers, and Campbells of Tobago who would have had beautiful memories with Anstay throughout his long and productive

life. There are too many other relatives and friends to list here but each one would have their own special recollection of him. He visited Trinidad and Tobago periodically to touch base with family, his last such visit was in 2018.

A heartfelt thank you to all who supported the family and reached out during his short illness and after his death. We truly appreciate your care, your concern, and support. You helped ease our burdens during our time of grief.

Our dad, father-in-law, grandfather, brother, uncle, cousin, relative, godfather, and friend will be missed by each one of us, in our own way for varied reasons. We thank God for the blessing he has been to us and our prayer is that we walk with Jesus so we can again share life with Daddy Perry in eternity.

One of his favorite Psalms was Psalm 133, verse 1 says “Behold how good and how pleasant it is for brethren to dwell together in unity”. He lived this; may we all do likewise.

Share Your Memory of
Elton Anstay
Upload Your Memory View All Memories
Be the first to upload a memory!
Share A Memory