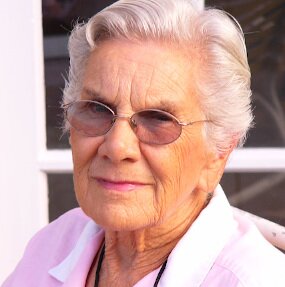 Eunice Gooch Conn (born Eunice Elizabeth Gooch) was born September 15, 1925, the daughter of H.K. and Clara Gooch in Dyersburg, Tennessee. She graduated valedictorian from Dyersburg High, and from the University of Tennessee, Knoxville.

With the end of WWII, she married her high school sweetheart, Jim R. Conn. She taught junior and high school math for 30 years. She was always active playing tennis, swimming, and hiking. A strong Christian all her life, she felt called to help spread the Gospel after the death of her husband. Being retired, she became a missionary to Free Port in the Bahamas. After a few years in Free Port, she teamed with another widow, Claryce Arnold, and spent the next years first in Jamaica and later in Guyana. When she returned to this country she spent many years as a member of the Sojourners ( a group of retired Christians volunteering their time to help struggling Christian churches and orphanages). She and Claryce worked with 100 churches/orphanages over those years.

Share Your Memory of
Eunice Gooch
Upload Your Memory View All Memories
Be the first to upload a memory!
Share A Memory