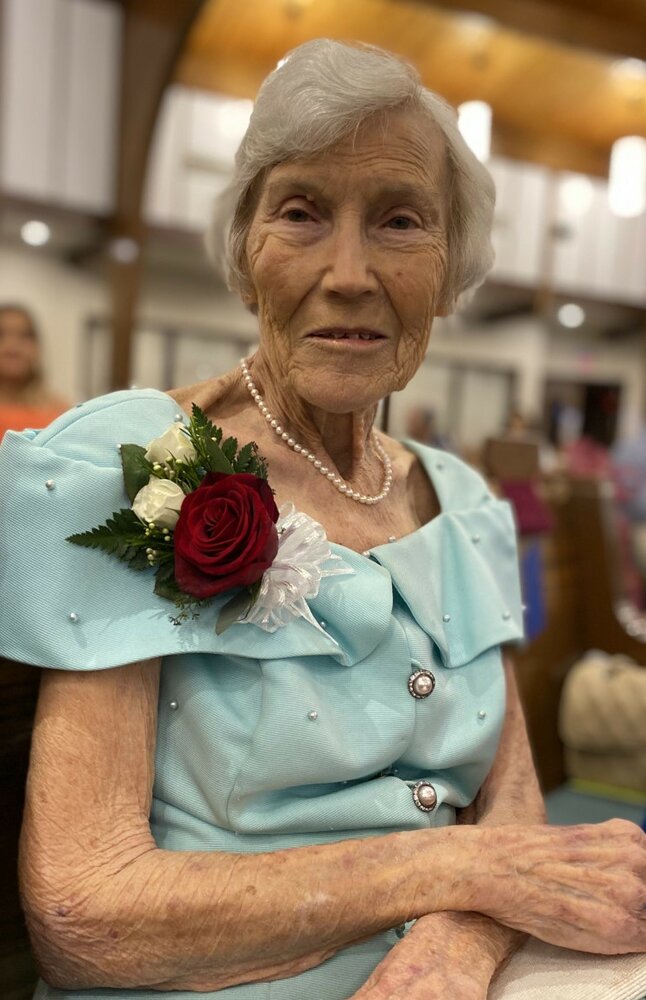 In 1947, Peggy was a student at Farmerville High School where she excelled in her education, even earning an American Legion Certificate Award which was awarded for her possession of high qualities of honor, courage, scholarship and leadership, this was a good example of Peggy's character.

Peggy later attended Louisiana Tech where she earned her bachelors in science degree. From there she went on to be a school teacher for part of her career. It was also there where Peggy met the love of her life Jacob Richard Brown also know to most as Dick Brown. Peggy and Dick decided that wanted to get married and on February 6, 1954, they were joined together by marriage in Farmerville, Louisiana. It would go on to be a long lasting and loving marriage.

Peggy and Dick eventually decided to move to Florida. In 1962, they made it official and purchased a home in Indialantic, Florida. They had found the perfect home in a great location and couldn't have been happier. This became their permanent home where they would spent the rest of their lives. As times went on Peggy and Dick decided they wanted to have a baby together. Though they were eager to bring their first child into the family, they were unfortunately unsuccessful. Peggy, for some reason, was unable to become pregnant. It was then they decided to look into adopting a child. They both agreed adoption would be best for them. In 1969, they adopted a baby boy and named him Jeffrey Richard Brown. It was not long after adopting Jeffrey, Peggy got a big surprise, she had unexpectedly become pregnant. What a surprise it was, now not only would they have one child but two added to the family. On July 19, 1970, Peggy gave birth to their second son, Gregory Barton Brown and their family was formed.

Peggy and Dick loved to travel the world and at the time the babies were too young to travel with them so they would have them cared for by other family members, one of the most notable was her mother Verdie and husband Elmer, also known as Mama "V" and Pop Pop. As the kids grew a little older, they decided it was time to bring them along on some of their journeys to explore different parts of the world. Together they created a lot of memories, traveling to many different places that included Hong Kong, Australia, New Zealand and Yugoslavia just to name a few. One of the most memorable for them was going to Hawaii, where they had been multiple times.

Although Peggy was employed in the education profession for quite some time, she eventually made the decision to move into the real estate industry. After lots of studying and hard work, Peggy was rewarded with her real estate license on October 28, 1980. She continued her career in the real estate business over the next 40 years, working for different firms along the was including National Realty, Eastwind Realty, Prudential Sterling Properties, and Berkshire Hathaway Home Services, where she continued working into her 80's. Peggy became a well known agent through out the real estate community. She took pride in everything she did. She was very dedicated to her job and always went above and beyond to make sure she provided the best services possible. Peggy was a hard worker and it showed in everything she did.

Even though Peggy stayed busy with her occupation, she still found time to spend with her loving family and close friends. Peggy truly cherished those times. In her off time, Peggy loved to spend time reading books, one of her favorite being her Bible. She also loved to cook delicious homemade meals for the family, some of the recipes were from her mother, Mama "V" and boy were they good. Everyone loved Peggy's cooking. Peggy really looked forward to the holidays when she could spent time with her mother, Mama "V', sister, Doris Ramsey and their amazing family. Everyone would make a separate dish to create a delicious meal for everyone to enjoy. They would oftern alternate between homes, having get togethers at the Ramsey's on some holidays and at the Browns on others.

One of the most exciting time in Peggy's life was the birth of her grandson, Chase Richard Brown, born July 23, 1996. Peggy, along with husband Dick were a major influence in Chase's life, helping him become an amazing young man with exceptional work ethic and strong family values. Peggy and Dick also known to Chase to "Dadaw" were so proud of Chase. Having him in their lives was such a joy to them. How special it was to watch him grow up and become a fine young man.

Though Peggy's life was filled with many loving memories, one of the saddest times of her life, was the passing of her loving husband Dick. On January 16, 2013, to the surprise of everyone, Dick had passed away very unexpectedly. Though Peggy was extremely saddeden by Dick's passing, she knew she still had work to do. Peggy put on a display of strength that was truly impressive to everyone around her. She was so committed to carry on for the family, just as she had done her whole life. It was very important to Peggy to be there for her sons and grandson. What a positive influence she had in their lives, how lucky they were to have such a loving and caring mother.

Even though Peggy had many friends and a great support system around her to help her get through Dick's passing, there was one in particular that Peggy was very close to, her best friend Margie, who also worked in the real estate industry. Peggy met Margie early on in her career and there was an instant bond between the two. It was the beginning of a very special relationship. Margie would oftern pick Peggy up and take her to lunch and get togethers, even touring around to different places and accompanying her in time of need. peggy spoke often about her memories with Margie, how special they were to her. People would sometimes tell them, "you must be sisters" and they wouldn't deny it, what a wonderful relationship they had, Peggy was so grateful to have Margie as a friend.

Although Peggy has been called to the Heavens and we are al extremely saddened, she would want us to be happy that she had lived a long and happy life and that she was noo longer in pain. Peggy left a lasting impact on the lives she touched and will be remembered for the best daughter, sister, wife, mother, grandmother, and friend anyone could have ever asked for. Peggy always had a way of knowing what to do in any situation. That remained to be true even at the end of her life, choosing to be taken into God's loving arms where she could be reunited with the love of her life, Dick, just 2 days before what would have been their 68th anniversary. How sweet it must be. So as we grieve with the loss of Peggy, remember all the good times and loving memories of Peggy because that's what she would have wanted.

A visitation will be held Tuesday, February 15, 2022 from 10:00 A.M. to 12:00 P.M. followed by a funeral service at Ammen Family Cremation and Funeral Care, 1001 S. Hickory Street, Melbourne. Entombment will take place at Florida Memorial Gardens, 5950 US Highway 1 in Rockledge.