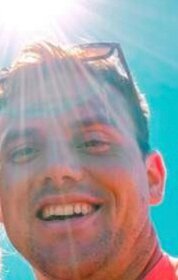 The middle brother of 3 from parents Denise Darlene Whitmire and Stephen Wayne Chalfant. At birth, Nick came into this world weighing almost 10lbs. Nick did everything big…Love big, Care big and Live big.

He recently was able to travel across the country all the way to California.

Nick was a loving father to his daughter Chesney and loved being uncle Nick to his niece Savannah, it was as if she was his very own.

Anyone that came in contact with Nick really enjoyed everything Nick had to offer from just sitting around laughing, working, being with family, and having nothing but love for this world and the people in it.

His nickname is "pooh bear" and that's because he is full of love and joy ALWAYS.

He lost his battle with cancer on December 30th, 2021 but even through those awful days, sleepless nights, and extreme pain, as miserable as he was, he built some heartfelt relationships with the staff at Advent Orlando.

He is more than truly missed but we know he is now everywhere whenever we need him.

Nick will be missed by his girlfriend Darien Peter and their puppy Remy.

Nick is preceded in death by his brother TJ Chalfant, father Stephen Chalfant, and cousin Dylan Chalfant and will be deeply missed by many aunts, uncles, and cousins and all they knew and loved him.

A celebration of life for Nicholas Chalfant is scheduled for January 15, 2022, from 5 pm to 7 pm at the DoubleTree Hilton Oceanfront in Melbourne Florida.

Share Your Memory of
Nicholas
Upload Your Memory View All Memories
Be the first to upload a memory!