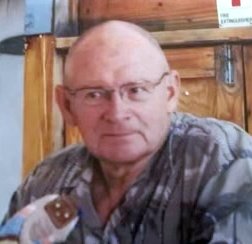 John Edward Peplinski was born March 25, 1944 in Erie, Pennsylvania and left this Earth on June 11, 2021 in Palm Bay, Florida at the age of 77. Although he has lost his long battle with cancer, the dignity and optimism in which he chose to fight with, is a courageous example of the perseverance and joy he had for life.

After graduating high school, John joined the U.S. Army, serving as a Private First Class for three years. It was also during this time that he married the love of his life, Roberta, and they began a family, which would ultimately be one of his most treasured accomplishments. He then began a career in the US Postal Service, continuing with it as he moved to the Melbourne, Florida area where he eventually retired in 1999.

He was an avid and accomplished champion horseshoe player, winning many accolades in the sport throughout his years of playing. He also enjoyed spending his time golfing, staying busy with household projects and he really appreciated the significance of a good meal! He was an animal lover and it seemed like his home wasn’t complete without a cat or dog to spoil. Most importantly, he loved his family and rarely missed an opportunity to spend time together.

John was preceded in death by his father, Joseph Peplinski, and his loving mother, Emma Johnson Peplinski. As well as his older sisters, Lorna (Peter) Traphagen and Elaine (Donald) Castille, who always adoringly doted on their younger brother.

He will be profoundly missed by his wife of 57 years, Roberta Wheeler Peplinski. Their love and friendship serving as the foundation for their family, which includes their three children; daughter Michele (Thomas) Parsons and sons, Joseph (Debra) Peplinski and John (Tiffany) Peplinski. As well as their seven grandchildren; Jamie (Jesse) Harrison, Samantha (Joshua) Baker, Corey Parsons, Ashley Peplinski, Jordon Peplinski, DeAndre Jackson and Joshua Peplinski; and eight great-grandchildren.

John had an infectious excitement and joy for life that will be missed, along with his kind soul.

A service to honor and remember his beautiful life will be held on June 29th at Ammen Family Cremation and Funeral Care in Palm Bay, Florida at ten o’clock. A burial service will be held later in the day at Cape Canaveral National Cemetery in Mims, Florida.

To send flowers to the family or plant a tree in memory of John Edward Peplinski, please visit Tribute Store

Share Your Memory of
John Edward
Upload Your Memory View All Memories
Be the first to upload a memory!
Share A Memory
Send Flowers