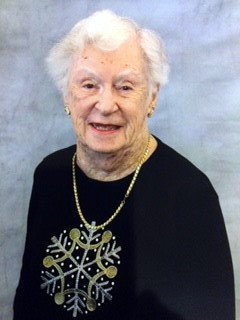 Jean Annette Protzmann Foley Frese was born in New York City November 22, 1922 to Annette Morhard Protzmann and Louis Protzmann.  Three years later, her sister, Beverly, completed a family, which included Buster, a Boson terrier, beginning her lifelong passion for the breed.  Her parents started a compound, “The Hilltop,” in Portland, PA where five generations of cousins met annually and developed a true value of family.  She attended The Academy of Mount Saint Ursula in the Bronx and upon graduation continued to the College of New Rochelle receiving a Bachelor of Science Degree in Chemistry.  She was first employed by Burroughs-Wellcome Company in Connecticut and then transferred to the Remington Arms Company to work as an analytical chemist in support the war effort, where her company, she and her peers were recognized with the Army-Navy “E” award.

On June 26, 1948, she married Francis Edward Foley in St Patrick’s Cathedral and thus began her life as an Army/Air Force wife.  Two daughters joined the family while Frank was assigned to Walter Reed Hospital.  Jean followed Frank, a thoracic surgeon/hospital commander, as his career took him around the world.  It also gave her a chance to follow her own dreams as an artist.  They retired to Florida where Frank had commanded the hospital at Patrick Air Force Base from 1964-1968 and reunited with many friends.  Jean volunteered with the Red Cross in support of the base pharmacy for 30 years and worked on improving her golf skills.  Regrettably, Frank passed away on May 19, 1976, leaving Jean to spend much of the next 18 years focused on her art, her friends, gardening, travelling, and her two Boston terriers, Henry and Harvey.

A pleasant surprise entered her life when on November 12, 1994 Gregory Clement Frese, Jr took her hand in marriage.  She was also thrilled to have his son, Greg, and daughter, Mary Frese Veilhauer, join the family.  For almost twenty years, Jean found true love a second time.  They shared an interest in golf and travelling, with Jean celebrating her 90th birthday playing golf with friends and family at the Patrick AFB Golf Course.  Sorrowfully, Greg passed away on September 14, 2014.

Wanting to be independent, Jean chose to move to Buena Vida Estates.  She continued her art, enjoyed playing – and frequently – winning bingo, attending prayer service delivered by Deacon Dan and many of the other activities Buena Vida provides.  Sadly, in the early morning hours of May 24th, she fell in her apartment in the Senior Living Facility and after a brief stay at Wuesthoff Hospice, she passed away peacefully on May 27th.

In lieu of flowers, please send a contribution to your favorite charity; Catholic Charities of Central Florida – South Brevard (321.636.6144); or the Buena Vida Foundation, Melbourne, FL.

To send flowers to the family or plant a tree in memory of Jean Frese, please visit Tribute Store