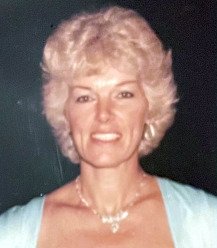 Barbara Marie “Barb” Devitt from Port St. John, Florida passed away peacefully on January 27th, 2021. She was born September 14, 1937 and was the daughter of the late Francis and Mary (Dwyer) Lee.  She grew up in New York City and attended public schools.

While still in high school, she met James Michael (Jimmy) Devitt. They were married September 15, 1955 and lived as husband and wife for 62 years before his passing in 2017.  They especially enjoyed traveling and family get-togethers in their many years together.

Barbara was a devoted mother and homemaker who was a talented artist with a gift for arts and crafts. She also was a talented singer who enjoyed performing in church choirs.

The family is deeply indebted to David Cook, a kind, loving soul and companion who cared for Barbara and brought happiness to her final years.  Her dog, Lola, was a source of great joy.

Barbara will be laid to rest with her beloved husband, Michael at Cape Canaveral National Cemetery on Thursday, April 1, 2021.

The family wishes to extend a heartfelt thank you for all the prayers, support, and love during this time.

My mother's presence always warmed our home
With peace and security and love.
She was like a gentle breeze that wafted through
Setting things right, creating a haven for us all.
Whatever problems we had, Mom solved them.
Whatever triumphs we had, Mom celebrated them.
Whatever needs we had, Mom fulfilled them.
Surely such a mother could never drift far
From those she loved with all her heart.
Though she has left her earthly body behind,
I feel her presence still.
Mom remains close to me, she knows my sorrow,
And she enfolds me in invisible arms I can still feel,
And she comforts me.

"She is clothed with strength and dignity; she can laugh at the days to come." Proverbs 31:25.

To send flowers to the family or plant a tree in memory of Barbara Devitt, please visit Tribute Store