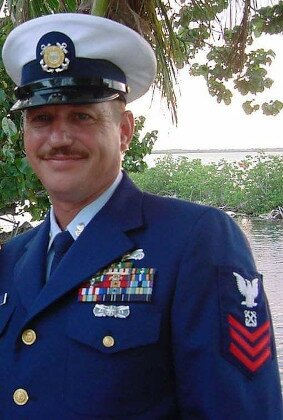 James (Jim) Roche, Sr. passed away on the 5th of December, 2022. He was born to the son of a Coast Guard Lighthouse keeper in Cuckholds Light, Maine, in 1966. Jim was born with the salt from the sea in his veins. His father's active duty career let Jim experience different perspectives of the Coast Guard while they were transferred all over the country. His passion for the sea and serving only increased, leading him to enlist in the Coast Guard in 1986. He started his career as a rescue swimmer and switched ratings, leading him to be an incredible heavy-weather boat coxswain saving many lives. He served in many states, including Alabama, Washington, Florida, and California. Jim's final duty assignment was Key West, Fl, where he retired in 2006. He relocated to Central Florida and immediately started working in the marine industry.

In 2011, Jim married the love of his life. Therese (Smith). They started a family which included Matthew, Kelly, and nephews Johnathan and Cole. Jim's two sons James and Jacob from prior marriages, currently live in St. Pete Fl and Beaufort, SC.

Share Your Memory of
James (Jim)
Upload Your Memory View All Memories
Be the first to upload a memory!
Share A Memory