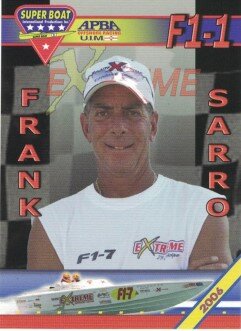 There are special people in our lives that never leave us even after they are gone.

In loving memory of Frank R. Sarro of Palm Bay FL who passed away on Tuesday October 18th at the age of 67 .

Frank was preceded in death by his parents, Frank and Elena, his brother Robert Frank, and his first wife Gail.
He is survived by his wife Tammy, the Davis Family, Nephew Robert and wife Abbey with two children, Bobby and Bailey, his sister-in-law Loretta. He is also survived by numerous cousins, countless friends and fellow boat racers of 30 years.

Frank's passion was on the water in a fast boat chasing the checkered flag for 30 years. His goal was to race this final year and he was able to accomplish two of those races by the will of his soul. He was known for his quick wit and his kind and compassionate spirit. When in his company you were in for a hilarious treat. He was always there to help no matter what and expected nothing in return. He had a big heart, love for family and friends, as these were the key to a happy life. Everyone who knew him respected and appreciated him.

Race In Peace Koolhand Frank, but remember to always maintain your lane. We'll be seeing you soon...

Memorial Services will be announced at a later date.