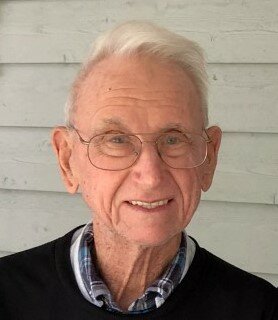 One of two children born to Norma Lillian and Frances Kenyon in Swissvale, PA, Richard attended Swissvale High School, graduating in 1947, and the University of Pittsburgh, graduating in 1954 with an Electrical Engineering degree. He worked for 2 years as a Laborer at Carrie Furnaces, a steel mill, to earn his college tuition. Richard also was in the Reserve Officer Candidate (ROC) program for the Navy. Richard met his future wife at a YMCA Square Dance. Upon graduating from college, he was married and then commissioned as an Ensign in the Active Reserves for the Navy. Richard was honorably discharged as LTJG to the Inactive Reserves in 1956. He then accepted a job with RCA, an electronics contractor for the Air Force Atlantic Missile Test Range and moved his family to Melbourne, Florida. He worked as a Telemetry Engineer, and installed the original Telemetry Station on Ascension Island in 1958. Richard loved the Navy and considered going back on active duty. In 1963 he discovered the Navy Polaris Program had engineering openings and started to work in the Plans and Data Acquisition Division of the Navy Special Projects Office, under the Naval Ordinance Test Unit (NOTU). He found a way to "Go Navy" without enduring all those cold, stormy night Officer of the Deck duties. He worked on submarines, destroyers, and flew on P3 aircraft. He saw many missile launches and traveled to most of the exotic islands in the missile tracking chain called the Down Range Stations. Richard worked in various divisions of NOTU, and on the evolution of the Fleet Ballistic Missiles (Polaris, Poseidon and Trident) before retiring. In retirement he continued with his love of tennis and also became an avid computer user. He enjoyed reading, woodworking, and even pursued art and sculpting at one time.

A memorial service will be held at Cape Canaveral National Cemetery, Mims, FL, on November 10, 2022.

In lieu of flowers donations may be made to Fisher House Foundation, fisherhouse.org