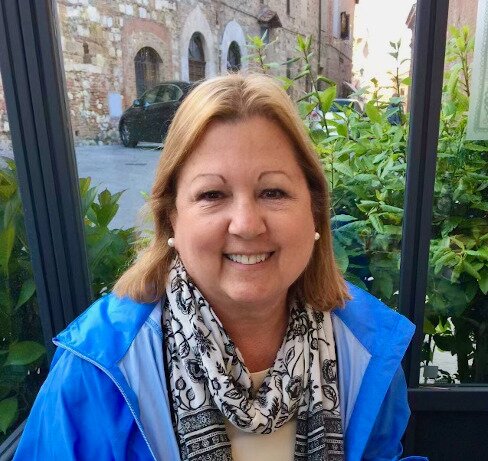 Donnalyn Rowe Scalera, 63, of Merritt Island, Florida, went home to Jesus on August 28th after a brave battle against cancer. We rejoice in her total healing and look forward to the day when we will see her again.

Donna was born in France to Jim and Cissy Rowe. Shortly after her sister, Lori, was born, the family moved to Texas so her father could earn a master’s degree at Texas A&M. Donna’s family eventually settled in Cocoa, Florida when her father took a job at the Kennedy Space Center. Donna grew up in Brevard County and considered it her home. She was a proud graduate of Cocoa High School where she and her sister were both in the marching band. She received her BA in Education with a specialization in Speech Language Pathology from the University of Florida.

Donna married Joel Scalera in 1981, and the two moved to Atlanta while Joel attended dental school at Emory University. After school, Donna and Joel moved back to Brevard County to raise their children and start Joel’s dental practice. The two were inseparable for their 41 years of marriage. Donna devoted the first part of her adult life to raising their three children, Jamie, Cameron, and Emily. She was active in their schools and ran a busy after-school schedule of dance, piano, voice, and sports of all kinds. Her career as a homemaker was truly remarkable as all three of her children went on to earn advanced degrees in their respective fields. Donna’s second career was as the office manager for Joel’s dental practice in Suntree. She had a gift for helping their patients receive the best care possible and was beloved by staff and patients alike.

Donna’s true talents were known mostly to her family. She was an outstanding cook with a wide repertoire, everything from lasagna to beef tenderloin to chicken enchiladas. Donna was also an expert travel agent and blessed her family by planning memorable trips to the North Carolina mountains, the Florida Keys, Europe, and the Cayman Islands.

Share Your Memory of
Donnalyn Rowe
Upload Your Memory View All Memories
Be the first to upload a memory!
Share A Memory