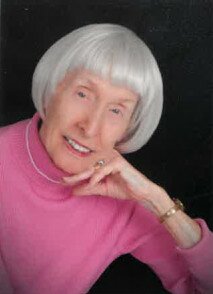 Marie Van Praag peacefully passed away in Suntree, Fl, at age 93 on April 13, 2022 after a long illness. She was born in Brooklyn, New York on May 3, 1928 weighing in at 2 and 1/2 pounds to Fred and Mary Neger. She had two sisters, Muriel, and younger sister, Elaine. At 18 after six weeks of courtship she married the love of her life, George, who previously passed away at age 102. They were happily married for 67 years.

In Syosset, New York, she was a matron of the Easter Star. She was an avid knitted, puzzler, and card player. She worked as an administrative assistant in the N.Y. main office of the J.C. Penny Co. and once in Florida she worked as a bank teller. After moving to Melbourne, Marie was an active member of St. Timorthy Lutheran Church in Eau Gallie.

In later years she and George moved to Melbourne to be closer to her immediate family and her life revolved around the apple-of-her-eye, her nephew Danny and his wife Diane, who belovedly took care of the ailing Marie in her last weeks.

Special love and appreciation to friend, Ruby Anderson, who visited and took her lunch every Tuesday for several years.

The family extends its grateful appreciation to St. Francis Reflections for the kindness and dedication of its personnel.

Memorials can be made in Marie's honor to the Brevard Alzheimer's Foundation www.brevardalz.org.