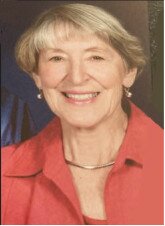 Olga D. Murphy, 90, of Peterborough, died surrounded by her loving family, on March 21st, 2022 in Melbourne Beach, Florida at her daughter's home.

She was born on April 22ns, 1932 in Waterbury, Connecticut, the daughter of Peter and Anna Sopensky.

Olga was married to john "Jack" Murphy, also of Waterbury, Connecticut in 1956.

A child of Russian immigrants, Olga spoke both English and Russian and was only the second member of her family to attend college. She attended Crosby High School in Waterbury, Connecticut and graduated with honors from Teachers College of Connecticut with a Bachelors' Degree in Education. Olga remained an enthusiastic student in retirement, studying languages and literature.

After completing her formal education, Olga became an elementary school teacher in Waterbury, Connecticut. She married Jack Murphy in 1957 and the couple moved to Indonesia where Jack was the Finance Manager for Uniroyal Rubber Plantations for six years (1956-61; 1971-1974). While in Indonesia, Olga homeschooled her son Brian. Then from 1974 to 2000 she went on to teach the first grade at the Wilton Elementary School. She was a respected and celebrated teacher in Wilton, winning several awards.

Olga's greatest legacy was her dedication to her family. She raised four children while mostly working full time. She grew up in an immigrant household and worked hard to improve her station in life. Her commitment to her faith and love for her family were unwavering throughout her life. It was her life long goal to visit the Holy Land and she finally made that trip in 2016 with her son Greg.

Olga enjoy reading, travel, and family events. She was a devoted parishioner and volunterr in Diving Mercy Parish in Peter borough.

She is survived by her daughter, Ann M. Demos of Melbourne Beach, Florida and her two sons, Gregory Murphy of Southport, CT and John P. Murphy of Missoula, MT.

A mass of Christian Burial will be celebrated on Monday April 18th at 11 a.m. at Divine Mercy Parish, 12 Church Street, Peterborough. Pastor Michael Taylor will be the celebrant.