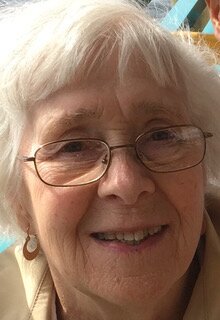 On April 1, 2022, Elizabeth Jill Jefferies, of Melbourne, Florida, passed peacefully in her sleep of natural causes. Jill was 87 years old.

Jill was born in Cheam, England on June 23, 1934. She was the eldest of John and Joyce ‘Jo’ Jefferies’ three children and grew up in Cirencester in the Cotswolds with her brothers Tim and Jeremy.

Jill was happily unbound from many conventional attitudes and found freedom in travel and the variety of life in other countries. When she was in her early twenties, she lived as an au pair in Morocco, and later traveled as a teacher to Chile, Moscow and the United States. During this time in her life, Jill, and her brother Jeremy, traveled together, exploring Russia, Rome, Canada, and the U.S. As a teacher, Jill held a senior position at the Washington International School (WIS). She later became a US citizen.

It was at WIS that Jill met her long-term partner, Marcia McDonough. They lived together in Washington until the 1980s, when they decided to move to a farmhouse in the hills of West Virginia. They quickly became an energetic and enterprising part of the community: teaching at the local school, helping to establish a crafts co-op, and founding Teasel Enterprise -- a business creating and dressing characters from these thistle-like, wild seed-heads. Teasel Enterprise grew to employee over a dozen local people and their teasels were distributed across the country and in places as far away as Japan. Jill wrote and drew extensively, recording nature, and animals which she so loved. She was an accomplished artist, and her sketches and paintings are a treasured part of her legacy.

In 2003, Jill retired and moved with Marcia to Melbourne, Florida. They enjoyed the warm weather, gardening, and the activities of their local community and book club. Jill touched everyone she met. She had a sharp intellect, loved a good debate, and was caring and supportive not only of friends and families but of the causes she believed in. Her English family particularly enjoyed her prolific and entertaining correspondence.

Jill was very generous, always ready to help open-handedly in times of need and on special occasions (never hesitating to buy, for example, only the most “superior” chocolates!) but seldom spending money on herself. Her selflessness was an example to all. From her earliest days Jill was a natural teacher, she was a woman of insightful intellect, firm in her convictions. Jill had a dry, precise wit and an intense interest in other people’s ideas and experiences which translated into great relationships throughout her life.

Jill was preceded in death by long-time partner Marcia McDonough, her brother Tim Jefferies, and her feline companion, Miranda.

Jill is survived by Marcia’s children Kevin, Alison, and Claudia McDonough, her brother, Jeremy Jefferies, his wife Pippa, their children Harriet and James, Tim’s wife, Dee and their children Sophie and Louise.

A special thanks to Lisa Conway and Tammy Hill of One Senior Place for their thoughtful and supportive care of Jill.

A virtual celebration of her life will be held in May and all who wish will be invited to join. In lieu of flowers, donations may be made to the WWF in memory of Jill.

Share Your Memory of
Elizabeth Jill
Upload Your Memory View All Memories
Be the first to upload a memory!
Share A Memory