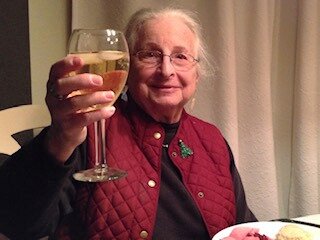 Our beloved Mother and Mother-in-Law Maryelln D. Ebarp died at 9:35 A.M. on the 7th of April, 2022. Though her death was not unexpected, it is still a grievous loss. Of course, it is impossible to capture a remarkable person like Maryelln in an obituary, but here is a shortened story of her wonderful life.

Maryelln Ebarp (neé Mary Elln Dzemske) was born on the 7th of September, 1927 in Milwaukee, Wisconsin where she grew up and lived throughout most of her life. She lived in Colorado Springs, CO and Melbourne, FL as well. She also lived briefly in California, Illinois, Iowa, and Mexico.

Born the daughter of a baker, Harry and seamstress/dressmaker, Edith, she grew up in the Great Depression and WWII, knowing hardship yet appreciating the fellowship that was forged during such a tragic period in world history.

Following in her mother's footsteps, Maryelln was born a natural performer. She took ballet and acting classes from an early age and thus she developed a love for the theatre. She was smart and serious about education, graduating as salutatorian from Whitefish Bay High School in 1945. She continued on with her lifelong love of theatre and the arts acquring a Bachelor of Arts degree in English at UW-Madison. Later, she spent a post graduate year at Stanford University, but returned to the Midwest where she received her first Master's degree in Theater and Drama from Northwestern University. She was an English and theatre teacher most of her life.

Maryelln married Don Ebarp in June of 1954. As newlyweds, they had many adventures together, running summer camps among them. Maryelln was lucky. She experienced many halcyon days that eveyone thinks will last forever. Those wonderful golden days early in her life and then in her children's early lives that were full of swimming and walks, dinners, games, and stimulatin discussion spent at a magical cottage on Silver Lake in Wautoma, WI. Later, with the kids still young, she and Don had a desire to see the country and there were memorable trips to see national parks and monuments in a VW van. Later, were the glorious years Maryelln spent competitive sailing on Lake Michigan with Don and Kristi as members of the Milwaukee Yacht Club.

Maryelln was thoughtful and kind. She could talk to anyone, and when you were in her company you knew she cared and was very intelligent. She was that rare person who befriended people from all walks of life, colors and creeds. While in Mequon, she was an active member of the Unitarian Universalist Church. As she also loved to travel, she had her own travel business for a short time in the 1970s called the Foundation for International Cooperation in which she organized home-stays on trips to Europe and Mexico. This love for international interaction, to meet new people and to experience new cultures started in the 1950s when she was with the American Friends. She donated a summer of her life to a small village in Mexico. In the 1960s, she and Don regularly hosted dignitaries from other countries through the International Institute in Milwaukee.

After mastering several occupations, Maryelln decided at the age of 60 to get her second Master's degree from UW-Milwaukee in Library Science. She then worked at the prestigious Prairie School in Racine, WI. She later became the beloved Children's Librarian at the Cedarburg Library, WI. While there she dramatically increased attendance of the summer reading program! Still bright and innovative, she brought in speakers on all subjects that parents loved to attend those evenings and weekend events as much as their children did! After retiring from the library and becoming a Milwaukee Arts Center docent, Maryelln and Don traveled as much as they could, seeing much of the USA and Europe, including visiting Greece and France with her docent friends.

Throughout her life, Maryelln was fortunate to have had a friend group that extended from the 1960s to her death. They called themselves The Book Club and they were her greatest friends and supporters. Some of Maryelln's friends may have stopped seeing her after she moved to Colorado to be near Don at his Alzheimer's facility. But many from Wisconsin made the rewarding trek to Colorado because Maryelln was a consummate entertainer and hosted many delightful evenings having dinner with her at her condo. And she really knew how to throw a party! She had a lot of practice! Ah... the 1970s! Those were the days!

Maryelln was a sensitive and curious person. She was never bored and hardly ever at home in her beloved Colorado Springs condo with a view of Pikes Peak, and a fireplace. A great joiner and educator she became a docent at two museums in Colorado Springs after the age of 80! She was the visiting "Reading Lady" to grade school children. She also volunteered her time to the local theater scene, becoming an usher so she could help out and also watch all of the wonderful plays and musicals at the Colorado Springs Fine Arts Center. Her cat, Patches, kept her company, as well as Bailey, a terrier of Kristi's who worshipped Maryelln. She later adopted Princess Arabella, a gorgeous Norwegian Forest cat, and Duffy, another little terrier. Of course Kristi and Charlie loved spending time with her, having her dine with them on Sundays to watch Downton Abbey and other Masterpiece shows. And the threee of them went on exciting trips including her fabulous 80th birthday jaunt to Toronto and Stratford, Canada to see as many Shakespeare plays as possible in 10 days.

Maryelln was adored as a daughter, granddaughter, spouse, mother, aunt, colleague, and friend. Unfortunately, the last years of her life battling dementia were the most challenging for her. But being the resilient soul she was, she found moments of joy and pleasure which she derived from staying as busy as possible. She passed away while being a much appreciated and cherished resident at Inspiritas of West Melbourne, FL. Maryelln is survived by her daughter, Kristin Stenborg; her son-in-law Charles Stenborg; her niece Lisa Parriott; and her nephews Dan and Garry Anderson and also Erik Ebarp. She is predeceased by her grandparents, parents and husband Don Ebarp, a veteran of WWII, who died in 2011. Her ashes will be interred next to his at Arlington National Cemetery.

If you know anyone who is struggling with the cruel effects of dementia, they need and deserve your empathy, presence and support. We take comfort in knowing Maryelln is now free from her horrific struggle against such a deadly disease. We would have given anything for her to experience clarity and happiness until her last breath. Adieu, dearest Maryelln. You were an amazing human beng. You were loved and will be missed.

Love you to the moon and back-
Kristin and Charles Stenborg