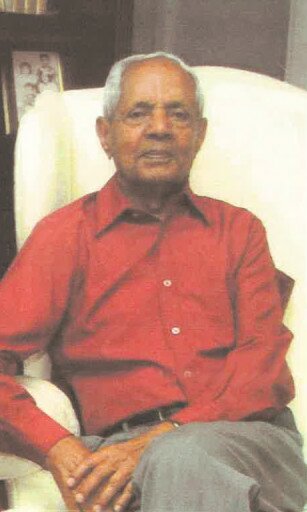 Good morning, thank you all for coming today to pay your respect and say goodbye to my dad.

I see many of the same faces I saw 5 months ago at my mom's funeral.

Thanks for coming once again.

A great man died on last Thursday. He wasn't a world leader, a famous doctor, a war hero or a sports star. He was no business tycoon and you would never see his name in the financial pages. But to me, he was one of the greatest men who ever knew.

He was my father.

I guess you might say he was a person who was never interested in getting credit or receiving honours. He did things like pay his bills on time, he helped us as kids with our homework, and as we gotten older, and project big or small.

When I was building my house, he will show up everyday from 8-5 at the site, making sure the workers knew he was watching. Of course, he would never let on that he knew a thing or two of building houses, which learned from his brother William back in Guyana.

He had high values and led by example. He treated all people he came across with equal courtesy and respect and I can never remember his passing a person anywhere without greeting them.

He started working at a very young age at a local sugar cane factory, where he quickly graduated to a lab technician processing sugar cane into rum.

His expertise led him to many overseas assignments at other refineries where he would work 3 to 6 months at a time and made enough money to last a year.

This man died not so much with a smile on his face, as with fulfillment in his heart. He passed away on his own terms. He did not suffer, he was not sick, he was in his home. He died knowing he was a great success as a husband, a father, a brother, a son, and most of all as a friend.

My dad was born on 10th September 1925 in Rossignol Village in Guyana to Mahabal and Sachee Singh. He was the youngest of 7 children. He survived his siblings, Parvati, William, Kunch, Jane, Lucy and David.

When Dad was around the age of 8 months old, he fell and injured his right hip. His babysitter at the time, his sister Lucy and he made a pact never to tell. That injury led to a lifetime of limping, and a nickname Limpy.

On May 17th, 1947 he married a young lade, Shany thru an arranged marriage. She remarked that he was a handsome man, but he walked with a limp. Well they stayed married for 74 years until my mom passed away 5 months ago.

A short story about that nickname.

In 1962, we moved to Ulverston, those of you from Guyana, may remember that was the year we had much race rioting. One evening I was riding my bicycle home from my grandparents house in Allness during one of these disturbances. My way home would take me thru a predominantly black neighborhood. I was pulled off my bicycle and was about to get a pretty good beating, when someone in the group shouted, stop! that's Limpy's son. Not only was I spared, I was escorted the rest of the way home.

That's when I realized how much my father was respected.

On their way to 74 years of marriage, they bore 6 children, myself, Shanty, Raj, Prakash, Sandra, and Paul.

In addition to their 6 children, there were also blessed with 10 grandchildren, 10 great-grandchildren, and 1 great-great- grandchild. I'm happy to say they are all here today.

My father was not a great philosopher, but he had a few gems he believed in and they became his mantra.

Those simple beliefs are what made a great man. Thanks pop.

Five months after my mom passed away, my Dad is reunited with his bride of 74 years to be together forever.

Thank you all once again for coming to say goodbye to my father and for supporting our family today.

Share Your Memory of
Singh
Upload Your Memory View All Memories
Be the first to upload a memory!
Share A Memory