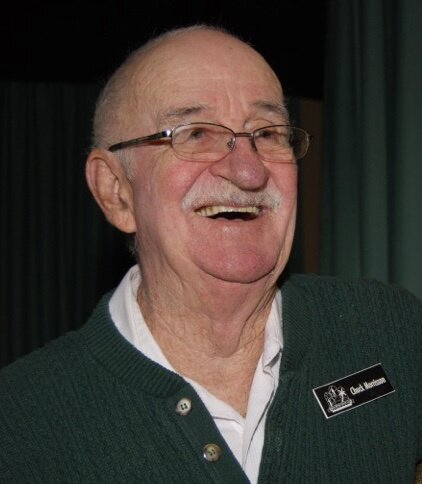 Charles Wyntur Morrisson (Chuck), entered into Eternal Life on St. Patrick's Day in 2022 as every good Irishman would hope to do. Chuck was born in New York and grew up in Washington, DC. After attending Gonzaga High School, he apprenticed as a machinist at the Washington Post, working his way up to Director of Technical Services before he retired. Chuck had a great love for his country, and as a young man, he served in the Air National Guard. He also had a great love of sailing and on his retirement, he moved to France, had a sailboat built, and cruised the canals of France, the Mediterranean, and the Caribbean.

After this big adventure, he settled in Melbourne, Florida, where he was the DockMaster at Melbourne Harbor Marina. It was there that Chuck and Linda met, married, and enjoyed their shared love for the water - swimming, sailing, diving, and cruising. Chuck was an avid duplicate bridge player and enjoyed many friendships made over the bridge table. He also loved golfing, both with his friends at Blacksburg Country Club, and later at Indian River Colony Club.

While not an emotionally expressive guy, Chuck loved his family deeply and appreciated all the friends that he made during his life's journey. Chuck is survived by his wife Linda Davis Morrisson and his children. He is preceded in death by his first wife Mary Louise Rosenbaum, mother of Loretta Gaegler (John), Charles (Amy), John (Nancy), Lisa Hayward (Jim), and his second wife Christiane Daniele Picouet, mother of Sean (Tracey).

A Memorial Mass will be held on Monday, April 4 at 11 AM at St. John the Evangelist Catholic Community, 5655 Stadium Parkway Drive, Viera, Florida. It will be followed by a reception in the Parish Hall at noon.

Donations in Chuck's memory can be made to the American Cancer Society or to Crosswinds Youth Services in Cocoa, Florida.