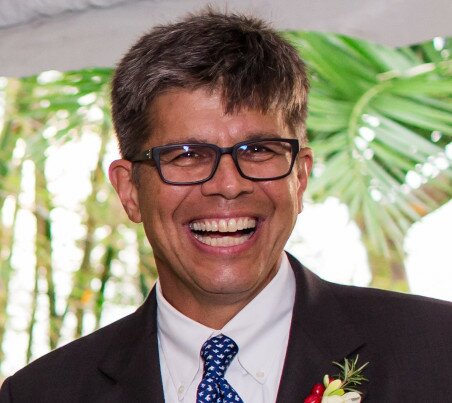 William (Bill) Lewis Baer passed away at the age of 62 from glioblastoma on Sunday, March 20, 2022, surrounded by his loving family at home. Bill was born in Hartford, Connecticut, to Marvin and Frances (Lewis) Baer. He grew up in Cocoa Beach, Florida, with his two siblings, Leah (Caplan) and Steven. He attended Cocoa Beach High School and graduated in 1977. During high school, he enjoyed playing baseball and worked multiple jobs including a paper route, at various Orlando theme parks, and at Publix, where his paychecks fueled a burgeoning passion for aviation through flight lessons.

At the University of Florida, he majored in Criminal Justice and often fondly recounted his time in the Pi Lambda Phi fraternity. After graduation in 1981, Bill worked as a police officer with the Gainesville Police Department while continually building flight time to pursue a career in commercial aviation. Assigned to the Crime Prevention Department as “Officer Friendly” he took his robot, Officer Friend2U, to the classroom and met a teacher, Carla (Moore); they married in February 1985, and their daughters Samantha and Alexandra (Hanrahan) were born in May 1986 and April 1987. He started working at Providence-Boston Airlines in May 1986, followed by Eastern Airlines, and then was hired by United Airlines in 1989.

He was a captain and flew multiple planes, including the Boeing 787, across every continent, Antarctica excluded. He was a member of and advocate for the Air Line Pilots Association. In 2003, in addition to flying for United, he and Carla founded Baer Air, a charter airline and aircraft services company, composed of a fleet of twelve aircraft, which they sold in 2014. Bill flew for United until his diagnosis in October 2020.

Bill will be remembered for his endless stories and wonderful sense of humor. Throughout his life he remained a bedrock of support and comfort to friends and family, giving advice and leading by example. He was a mentor to many young pilots, working as a flight instructor throughout his career in aviation. He loved playing Scrabble, cruising in the family boat on the Indian River, and always had an aquarium at home in addition to innumerable rescued pets. Bill never met a house project too daunting, including a renovation of their home on Merritt Island, Florida, and an 18th century historic stone house in Winchester, Virginia. He was a wonderful father, forever committed to Samantha and Alexandra. Bill was preceded in death by his father, Marvin Baer. He is survived by Carla, his loving wife of 37 years; devoted mother Frances Baer; daughters and sons-in-law Drs. Samantha Baer and Peter Dumoulin, Alexandra and Garrett Hanrahan and their newborn son William Baer Hanrahan; his siblings Leah (Baer) and Andy Caplan and Steven and Joy Baer, along with his in-laws Mary and Arthur Moore and brother and sister-in-law Chip and Debbie Moore. His many nieces, nephews, and cousins gave his life added joy. He will be missed by so many loving friends and family.

In lieu of flowers, please consider a donation to the Florida Wildlife Hospital, the Brevard County Humane Society, or to a charitable organization that Bill would have liked. A funeral service will be held on Sunday, March 27 at 3 pm at Temple Israel in Melbourne, Florida.

Share Your Memory of
William Lewis
Upload Your Memory View All Memories
Be the first to upload a memory!
Share A Memory