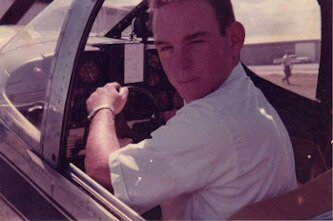 Husband, father, pilot passed away on January 11, 2022. He is remembered in life by his wife Elaine, daughter Stephanie, and son David Jr.

David was born in Memphis, Tennessee to John and Doris D’Arcy. David loved airplanes. He learned to fly at 8 years of age from his father. At the age of 16, he was an aerobatic pilot and won his first title at 18 in 1964. He went on to win several first-place aerobatic titles flying his Globe Swift.

He was hired at age 19 as a pilot for Eastern Airlines where his career spanned 20 years. He retired in Melbourne, Fl in 1987.

In 1976, while flying an aerobatic practice, the wing broke off David’s Swift. Plummeting to the earth, David was thrown out of the plane at 170 feet above the ground, and his parachute opened at 72 feet. He hit the groundbreaking 3 vertebrates. He walked out of the Everglades holding his parachute.

He enjoyed flying his own airplanes, traveling, and boating. David battled many forms of cancer for over 20 years. He was a fighter till the end. It was God’s will to take an amazing man.

Share Your Memory of
David Michael
Upload Your Memory View All Memories
Be the first to upload a memory!
Share A Memory