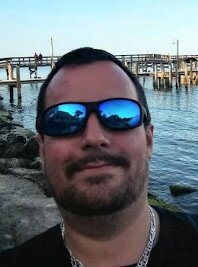 Jonathan Daniel Weber was born in Tampa, Florida on October 18, 1985. Four days later, Jonathan was adopted by his loving parents, Dave & Sheila Weber. Their void of being childless was filled by this bright-eyed baby boy. Jonathan grew up learning about Jesus at home, church, and in the Awana clubs at Rockledge Baptist Church.

Throughout his life, he always had a love for cooking and would pride himself on the presentation of each dish he would make, ask how it tasted, and then would explain what he did differently this time. His dad did not like spicy food and Jonathan would always say, “Dad, it’s not that hot.” From a young child, cooking shows were one of his favorite things to watch and he would try to make the recipes he saw.

Recently, Jonathan’s eyes lit up when he received his new turntable for Christmas and had enjoyed playing record albums by Johnny Cash, the Beatles, and Jimmy Hendricks.

After coming to grips with his health condition, he reassured his grandmother over the phone in December that he knows Jesus is His Savior and knows where he is going when his life is over on this earth. We are confident that he is now without pain and is face to face with Jesus, as the Scripture says in II Cor. 5:8, to be absent from the body, is to be present with the Lord. Now at 10:03, we will be reminded that he is experiencing complete health and joy in the presence of Jesus in heaven.

Donations in memory of Jonathan Daniel Weber can be sent to Faith Farm Ministries, Okeechobee, Florida.

A memorial service will be held at

(near Parkway on Wickham)

Flowers should be sent Friday, February 4th, to the church.

Share Your Memory of
Jonathan Daniel
Upload Your Memory View All Memories
Be the first to upload a memory!
Share A Memory