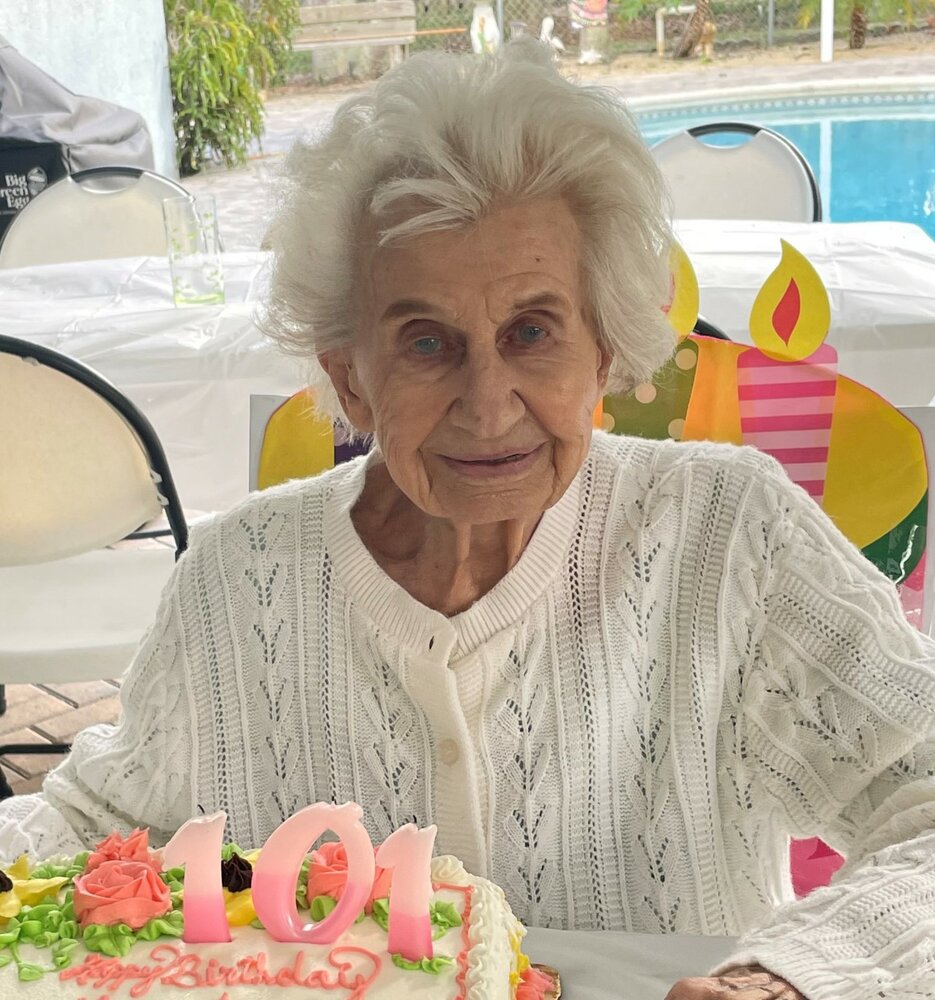 Helga Margarete Emilie Courtney, age 101, passed away peacefully at home on Sunday, January 9, 2022 in Malabar, Florida with loving family at her side. She was born on October 28, 1920 in Magdeburg, Germany to Anna Paula (Demsat) and Curt Wilhelm Ferdinand Güssow.

Helga told many stories of a wonderful childhood in Magdeburg. She loved animals and had many pets throughout her life. Helga often talked of playing in the stable at her father's factory and riding the big horses that pulled the wagons. But WWII brought drastic change to her life and she preferred not to talk much about those days. On July 19, 1941 Helga married her first love, Nelso, and they moved to Tai Di Cadora, Italy. Unfortunately, Nelso was killed in 1944 so Helga returned to Magdeburg. During the post war reconstruction period in Germany, Helga worked as a translator. It was then that she met Robert who had re-enlisted in the US Army and returned to duty in Germany. They married in Füssen on July 29, 1953. Helga was about 3 months pregnant with Susan when she and Robert came to the United States via the Navy military sea transport aboard the U.S.N.S Private Elden H. Johnson arriving in New York November 20, 1953. Robert took her to his hometown of DeFuniak Springs, Florida where they lived a couple years. Helga said she had no idea what to expect when she left her homeland to come to America but that she had no regrets when she arrived in Florida because she thought it was paradise. They moved to Chicago, Illinois in 1956 just before Faye was born. Helga became a US citizen on August 27, 1957. In 1958, Robert arranged a trip for Helga, Susan, and Faye to visit her family in Magdeburg. They crossed the Atlantic on the world's fastest and most modern liner of that time, the S.S. United States. Helga and the girls spent 4 months with her parents. By 1964, Helga and Robert were ready to return to Florida. They settled in Orlando where they lived until 1997 at which time they decided to move to Malabar, Florida to be closer to family. Helga was an avid reader and also loved to play games. She was a very active person who swam almost daily until age 98.

Helga was preceded in death by her parents; her sister Ingeborg Güssow, her first husband Nelso Coletti, her step-daughter Mirella Siorpaes, her step-son James Everett Courtney, her grandson Corey Courtney and her husband, Robert, to whom she was happily married for 46 years.

A Celebration of Life will be held at Joy Lutheran Church in Palm Bay but the date has not yet been determined.

In lieu of flowers, contributions may be made in her memory to Guiding Eyes for the Blind or to an animal rescue shelter of your choice.

Share Your Memory of
Helga
Upload Your Memory View All Memories
Be the first to upload a memory!