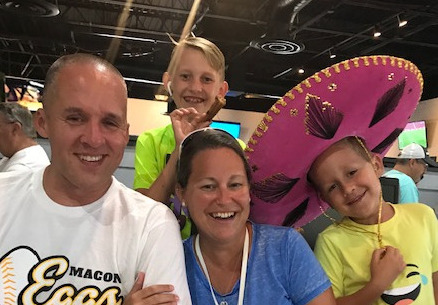 Timothy Allen Forcier was born March 18, 1980, in Landstuhl, Germany, to his parents Marc and the late Cheryll (Vivequin) Forcier. He was definitely put on this planet to bring light and joy wherever he went. He had a serious gift for joke-telling and knew how to make even the biggest curmudgeon smile. Those closest to him would often be seen rolling their eyes as he laughed at his own quips. He wore hilarious T-shirts and did everything he could to be a voice of reason in heated situations. If he couldn’t, he told a joke. And if that didn’t work, he withdrew knowing his energy was too precious to waste on pettiness.  He was a gentleman and truly noble human being. And anyone who knew him was automatically his friend. He was the kind of person who didn’t have enemies.

Tim had a deep passion for people and loved those closest to him with great fervor. He and his wife, Tammy, were truly soulmates, calling themselves TNT and shouldering life together. Tim was interested in sports of all kinds, especially basketball (Go Spurs). He played for Satellite High School until a medical condition rendered him unable to play- dashing some of his personal dreams. Despite his inability to play, when most teenagers would be frustrated, Tim provided managerial support to the team and helped with coaching JV. He did not let his condition take away from his love for the game, even though he couldn’t play. Tim graduated from Satellite High in 1998 and went on to complete a Bachelors degree in Mechanical Engineering at The University of Central Florida. He spent several years working for Harris Corp. He most recently worked for Leonardo DRS in Melbourne, FL. He continued to have ongoing medical concerns throughout life, and yet Tim always had a smile on his face and refused to let his pain and discomfort steal what joy he had. Tim supported every passion his children had including little league baseball and he volunteered a great deal of time to the sport in his later years. His son had a passion for the sport and Tim made every way for Zac to be able to play travel ball over the past few years.

Timothy passed away on December 16, 2021, following a diagnostic medical procedure. He was preceded in death by his mother Cheryll Forcier and Grandfather Gerald Forcier. He is survived by his wife Tammy, sons Zachary and Bradley, Grandmother Judy Forcier, Father and Stepmother Marc and Deborah Forcier (Ballard), Sister and Brother-in-Law Amy and Wayne McCartney, Stepsister and Stepbrother-in-Law Kristin and Jesse Wallace, nieces and nephews Emery, Athyn, Selah, Ellison, Lydia, Madison, and Sterling.

Timothy donated his organs and saved the lives of four people, continuing to be a gift to those and their families.  Timothy was truly a gift to the entire world, and without him here, it is a little duller. He will be missed by so many in the little league community and by his friends and family. It is our hope that Tim’s memory will live on in the crazy shirts we choose to wear, the way in which we cheer on our children at their sporting events, or how we choose to tell an off-color joke to lighten the mood. We know he trusts us to carry his gift forward and we pray you will join his family on the quest of making this world a more loving and enjoyable place- despite its pain and heartache.

In lieu of flowers, we ask that you donate to the GoFundMe set up for Tammy and the children so that she can continue to provide for the boys’ sports and extracurricular activities. https://gofund.me/e56c3653