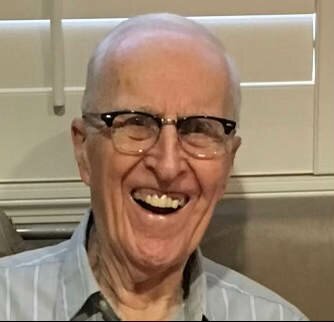 Jim was born in New York, NY on July 16, 1926 to Mary Kehoe and Henry Fallace. He served in the U.S. Navy as a hospital Corpsman in WWII from July, 1944 to June, 1946; and in the US Navy reserve through June of 1950. After WWII, Jim received his bachelor’s degree from Evansville University in 1949 and his Master’s degree from Indiana University in 1962. After graduation from college, Jim worked in retail management for the New York based Kline’s Department store chain until he found his calling in secondary and vocational education. Jim moved his family to Gary, Indiana and was instrumental in establishing a vocational educational system in the Gary school system where he became the Director of the Gary Area Career Center. Jim served as the Chair for the Indiana Vocational Advisory Council for the State of Indiana. Jim mentored and enhanced the lives of countless high school students throughout his career. In June of 1991 Governor, Evan Bayh awarded Jim with the appointment of Sagamore of the Wabash for his lifetime community and civic contributions for the State of Indiana. He was a devoted husband for 67 years of marriage and a father, grandfather, great-grandfather and uncle.

Family services will take place on November 26, 2021 at the Cape Canaveral National Cemetery with the U.S. Navy Honor Guard.