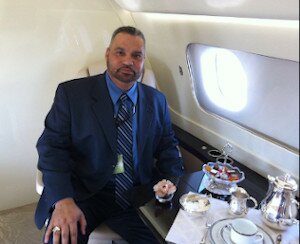 Our beloved, Joseph John Colón, affectionately known as “Jay,” went home to the Lord on Wednesday, November 3, 2021. Jay was born on November 20th, 1959, in the Bronx, New York to his proud parents, Joseph and Dora Colón. He was the third of four children and the only son. He was raised with his three loving sisters: Diane, Linda, and Lisa.

In 1977, he left his hometown of New York City to serve proudly in the U. S. Navy. He was stationed in San Diego, CA where he began his life on the West Coast. In 1979, he married his first wife Gloria from whence he had his first two daughters, Lisa and Jazzmin. After leaving the U. S. Navy, he went to work at the Long Beach Naval Shipyard. A few years later, he began his 33-year illustrious career in the Aerospace industry working at McDonnell-Douglass, which later became Boeing Corporation. During his tenure, he was promoted from an Aviation Mechanic to a Production Manager, obtained his Airframe & Power Plant (A&P) license and had the distinction of overseeing C-17 Operations. He was a hard-working, dedicated, and a well-respected professional.

In 1992, Jay met the love of his life, Myrna Quiñones, and after a one-year courtship, they married. As a result of their marriage, he gained a new daughter, Jazmin and his only son, Joseph was born. Jay was a family man and a great provider. Together, Jay and Myrna bought a house in Bellflower, CA where they created a beautiful, loving home for their family and friends.

In 2007, he relocated his family to Florida and due to his job, he remained in Southern California; he later joined his family in Florida. Upon this move, Jay began a new journey with Embraer Aerospace in Melbourne, FL in 2011 where he proudly served as a Production Supervisor for eight-years.

Jay had many hobbies and various activities he liked to do. He enjoyed all sports in general, and was an avid fan of the New York Yankees, Los Angeles Lakers, and New York Giants. Jay loved going to the gym to work out daily, as he strived to stay healthy and fit, notably accomplishing a five-mile marathon race, Tour De Cure, to join the fight against Diabetes in March 2016. He was a dedicated bicyclist and found joy in biking many miles alone or with Myrna. He loved Salsa music, Cruising and exploring new places with his lovely wife, Myrna. He fiercely loved his family and friends. During his lifetime, Jay touched the lives of many personally as well as professionally.

In 2002, under the leadership of Luis Vasquez at Calvary Temple, he dedicated his life to the Lord, and he immediately became involved in church ministries alongside his Pastors. Upon Jay’s relocation to Florida, he found a new spiritual home at The House church in Palm Bay, FL. He was actively involved in the church ministry alongside his Pastors Ken & Betsy Delgado and he along with Myrna led a Couple’s Ministry within their church which positively impacted many couples. He was a man of great faith and was a shining light during his life.

In 2018, Jay experienced one of his proudest moments, celebrating his 25th year wedding anniversary by renewing his vows to his wife Myrna. This joyous occasion was celebrated in the presence of many, family and friends from near and far.
Jay was a strong and proud man. During the last couple of years of his life, his health started to decline which resulted in him being diagnosed with ALS. For those who were unaware; Jay was battling ALS, and this illness took his quality of life away by limiting him in doing the things that he loved most. He required complex care that was provided by his wife, numerous medical professionals and agencies including the ALS Clinic- Florida Chapter, Veteran’s Affairs Administration and VITAS Hospice Care.

During his well-lived life, Jay formed lasting relationships, fruitful friendships, was loved by many and will be dearly missed by all.

Jay leaves behind to cherish his memory; his loving family: his wife Myrna, his daughters: Lisa Colón- Hobson, (her husband Tommy Hobson), Jazzmin Colón, and Jazmin Marrero, his son; Joseph Colón; and seven grandchildren: Kobe, Isaiah, Alyssa, Jacob, Antonio, Havana, and Trey, his aunt Eileen Graciano, his sisters: Diane Vasquez (her two adult children, Gabe and Lisa, and her three grandchildren), Linda, and Lisa (her three children, Serena, Jazzmin and PJ and her four grandchildren) as well as extended family and friends.

Jay will be cremated privately; however, the family will celebrate his life during a memorial service on November 20, 2021, which would have been his birthday. Jay, as a U. S. Navy veteran, will receive military honors on the day of his memorial service.

We would like to thank the VITAS Hospice Team and staff, the Veteran Affairs Administration, and the ALS Clinic – Florida Chapter for all their care and support during these tough times.

Share Your Memory of
Joseph
Upload Your Memory View All Memories
Be the first to upload a memory!