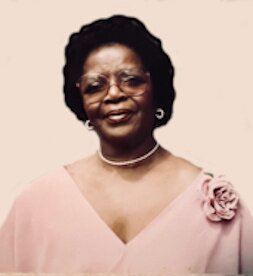 Dorothy Elise Garnett (known by her friends as Pansy) transitioned at the ripe age of 96 peacefully in her sleep at her home in Palm Bay, FL on October 16, 2021. She was the most caring and loving person who was very devoted to her family and friends who knew her.

She was born in Plantation Enmore, Guyana, South America to Charles and Ruth Abrams. She was also one of five children: Enid (known as Daphne), Elsie (known as Doreen), Maclean, and Richard (known as Lanny). She was a loving wife and mother to her husband William Oscar Garnett (deceased) and her only daughter Dorette, respectively.

Dorothy was known for her compassion and love of gardening and baking. She made an impact on all those who met her.

She is survived by her dear sister Enid, her daughter Dorette, her granddaughter Jamila, her great-grandson Roman, her nephew Mark, her nieces Heather, Menen, and Ann, her great-nephews Rolando, Jason, and Andrew, her great-nieces Lily and Nicole, and several “adopted” sons and daughters.

Dorothy was preceded in death by her sister Elsie, her brothers Maclean and Richard, her husband William, her nephew John, and her niece Elizabeth.

The family expresses thanks and deep appreciation to all of those who by their prayers, visits, and other expressions of sympathy have provided support to them. They deeply appreciate all of your acts of kindness.

In lieu of flowers, a donation may be made in Dorothy’s name to the following: