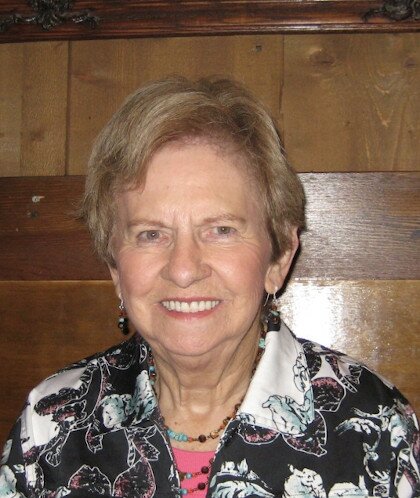 Myrtle Eileen Green passed away on October 28, 2021, at the home of her daughter and son-in-law in Melbourne Beach, Fl. Myrtle was born on July 13, 1928, to Frieda and Henry Soper in Manahawkin, NJ, and lived there until retirement.

Myrtle grew up with a sister, Dorothy (King), and three brothers, Mills, Philip, and Daniel Soper. She graduated from Tuckerton High School and married her husband, Donald E. Green in 1950. Myrtle and Donald built a life together in Manahawkin with their two children, Donald L., and Nancy. Sadly, they lost their son Donald in 1987. Myrtle’s siblings also predeceased her.

Myrtle took pride in her career as a legal secretary, retiring in 1990 from Kelly and Butensky law firm in Tuckerton, NJ. Upon retirement, Myrtle fulfilled a dream to return to Arizona, where she had spent a summer at age 18. She and Don packed up their belongings, and set off with their cat and motorcycle in tow, to their new home in Carefree, Arizona. For many years, Myrtle and Donald welcomed family and friends to their homes and were always excited to show them all of the sights – Grand Canyon, Sedona, Tombstone, and many more. They spent many happy days traveling throughout Arizona, fishing in the lakes, making new friends, riding their motorcycle, enjoying their home and pool, and even enticing some NJ friends to relocate to the area. Their daughter and son-in-law, Nancy and Henry Dell’Osso, and grandchildren, Brian and Kelly O’Keefe were frequent visitors.

A few years after Donald’s death in 2002, Myrtle returned to New Jersey to be near family. When Nancy and Henry retired to Melbourne Beach, Florida in 2016, Myrtle relocated to nearby Palm Bay, despite her declarations that she would “never live in Florida – too many hurricanes!” She always looked forward to visits from her grandson Brian and his wife Madona, who live in Fargo, ND. Myrtle enjoyed living independently until her recent illness, continued her lifelong interest in playing piano, and took great care of her two cats, who had reluctantly relocated with her.

A graveside committal service will be held on Tuesday, November 16 at 11 am at Greenwood Cemetery in Tuckerton. Friends may share a memory at the funeral home website – afcfcare.com. In lieu of flowers, please donate to your favorite charity.