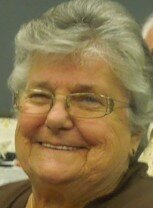 Geri was born in Detroit, Michigan. She graduated from Holy Redeemer High School in Detroit. Geri went on to work at Detroit Broach and Machine Company in Auburn Hills as a receptionist and PBX operator, then later at Copco Industries in Detroit. Meeting with so many customers and salesmen honed Geri’s love of one-liners and quick quips. That gift and her gentle humor never left her. She met her husband Richard Dougherty while at Copco. They honeymooned on Anna Maria Island in Florida and thus began a lifelong love of the beach and sunshine and warmth.

In 1972 Geri and Richard moved to Florida permanently. They settled in Palm Bay. Geri worked for Walgreen’s Drugs in Melbourne for a short while and then later for the City of Palm Bay in the Human Resources Department. She loved her city family and stayed until her retirement. During those years Geri participated in countless charity drives and fundraisers. She was generous with her time.

Geri leaves behind her beloved sister, Loretta Shamus Pilgrim of Cedar Rapids, Iowa; her adored brother Larry (Koong) Shamus of Bangkok, Thailand, and a multitude of loving nieces, nephews, and cousins. Richard predeceased her in 2018.

The family wishes to thank Geri’s primary caregiver, Zykia, and all the staff at Wellness I Am in Palm Bay for their tender care of Geri. Thanks to Vitas for the support they provided as well.

Geri was proud to be Polish. She frequently inserted Polish words and idioms into her conversations. It is fitting to close with these words: Żegnaj i niech Bóg cię błogosławi, droga Geri

Share Your Memory of
Geraldine Shamus
Upload Your Memory View All Memories
Be the first to upload a memory!