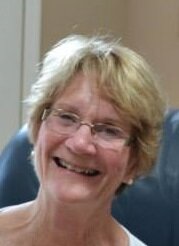 Elizabeth Cartwright Mitchell, 73, of Grant, Florida, passed away September 27, 2021, in her home after a lengthy illness by which she refused to be defined.

She was born on November 6, 1947, in Fort Lauderdale, to Julia and Mark Mitchell. She attended Cardome Renaissance Centre, once an all-girls boarding school in Georgetown, Kentucky; studied life in Paris, and met her mystery man of travel, Norman Mitchell (no blood relation) during an event in Turkey. It was love at first sight. They were married for 40 years. Mr. Mitchell predeceased her in 2009.

Elizabeth was an avid tennis player, and, fiercely independent, she was an adventurer who was unafraid to travel solo around the world.She was active in the Grant Community Center and organized volunteers for the dinner line every year at the Grant Seafood Festival. She dedicated her life to her children, her grandchildren, her dogs – especially Elsie – and her friends and neighbors. Indeed, her neighbors became her friends, and she spent her life cultivating her friendships.

In the end, the community she made for others became the community she received. Elizabeth was surrounded by love and support; even her children's high school friends came to share their memories of her during the final days. She was never alone, which is what she wanted most.

Elizabeth is survived by her daughter, Christina, and her son-in-law, Mike; son, Michael; his wife, who was more like a daughter than an in-law, Sharon; grandchildren Emily, Michaela, Abby, Annie, Benand Audrey; her brother, Mark; step-brother, Patric; and a community of friends who will never forget her. She was preceded in death by her husband, Norm, her sister, Sally, her parents, including a mother she lost early in life, and a beloved stepmother and aunt.

A funeral service will be held at 10 a.m., November 5, at Saint Sebastian Catholic Church, in Sebastian, Florida, immediately followed by graveside services at Grant Cemetery and a celebration of life at the Grant Community Center at noon.

To send flowers to the family or plant a tree in memory of Elizabeth Mitchell, please visit Tribute Store