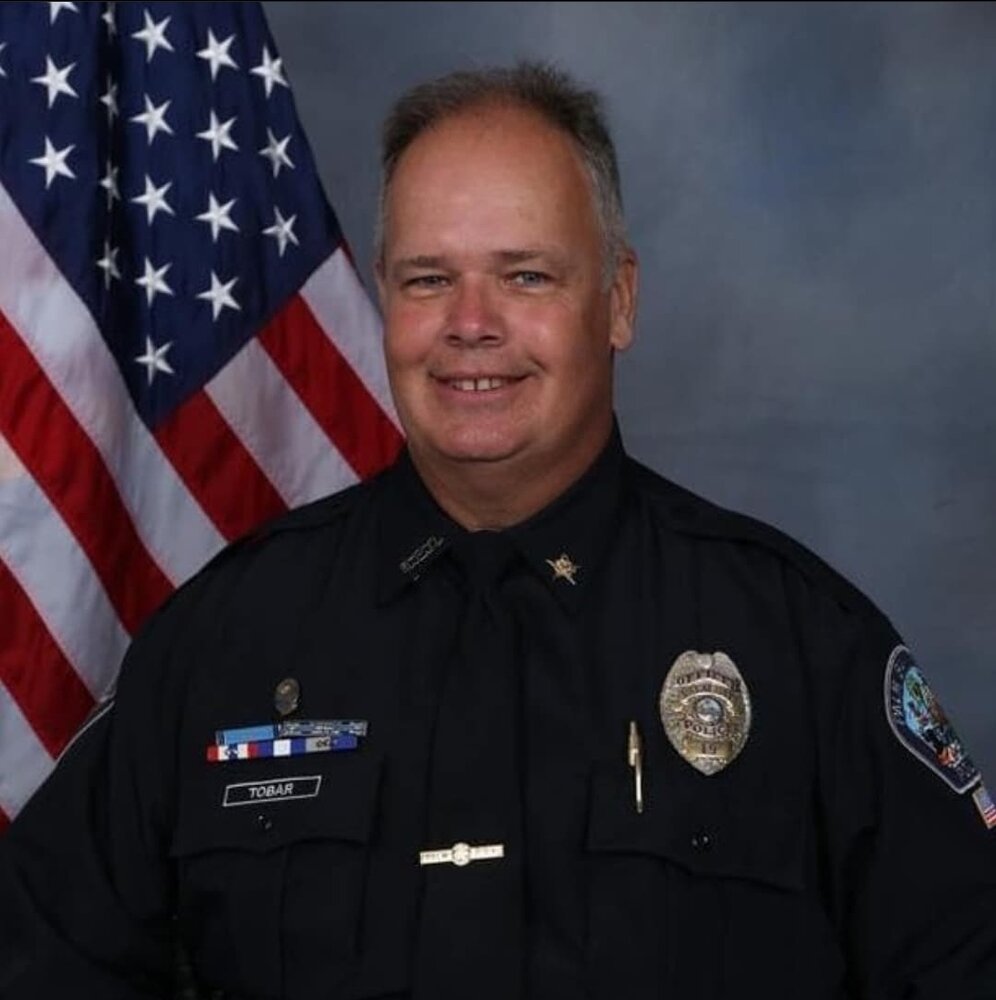 It is with great sadness that the Family of Francisco J. Tobar of Palm Bay announces his passing On August 20th, 2021 at 1:20am at the age of 54 years old.

Frank will be lovingly remembered by his loving wife, Patricia; his brother, Agustin; his daughter, Sarah and numerous other family members, friends, brothers and sisters in blue and many Palm Bay Police Explorers.

Frank was born in Barranquilla, Columbia to Agustin and Pauline Tobar.  The family moved to the United States in 1968 and settled in West New York, N.J. where Frank attended Harry L. Bain grammar school, and Memorial High School where he was a member of the football team, the Memorial Tigers.  Frank would spend summers after school at the local parks playing football, baseball and skateboarding with his friends.  He worked for Bobcor Motors/Alfa Romeo in Hackensack, N.J. during the week, and at the local pizzeria making deliveries on weekends.

Frank was an ASE certified mechanic and he worked for the City of Palm Bay’s fleet department as a mechanic servicing and maintaining vehicles for ten years where he was inspired to become an officer.  Frank was one of the most inspirational and influential men that many of us will ever meet.  Not only did he live his life with excellence, but he lived it while outpouring the love of Jesus to everyone around him.  Frank was a police officer for the Palm Bay Police Department for 17 years where he poured his life out for his family, friends and community.  He accomplished so many great things and served his life as a mission field to help others.

Frank had countless certifications in the State of Florida to include being a defensive tactics and Master Taser Trainer instructor.  He not only served as an instructor for his own police department, but he used his knowledge to instruct at the local academy.  He was instrumental in teaching generations of police officers, who serve communities throughout Brevard County.  He took pride in helping to for the FDLE Defensive Tactics curriculum for the State of Florida.  He served as the range master at the Palm Bay shooting range for many years, among other accomplishments.

Furthermore, Frank was the Lead Advisor of the Palm Bay Police Explorers for 15 year and spent 5 years coaching girls soccer with Palm Bay Soccer Club.  This is where Frank will always be remembered as influencing lives of countless youth in his community.  The kind of impact that Frank had on these future men and women was the kind that will last for generations to come.  The kind of impact that changes futures and he did it all in the name of Jesus, counting himself less than others and creating relationships that will never be forgotten and always remembered in eternity.

Frank’s celebration of life is open to the public, all brothers and sisters in blue, Explorers and family.  It will be held on September 4th, 2021 at Calvary Chapel, 2955 Minton Road, West Melbourne.  A viewing will be held from 9:30am to 10:30am, with a full honors Law Enforcement Service to begin at the same location at 11:00am.

A reception will be held on Sunday, September 5th, 2021 at Ted Whitlock Center located at Fred Poppe Park in Palm Bay from 11am to 2pm.

Memorial donations may be made to the Palm Bay Police Explorers through a GoFundMe page that you may find at  https://gofund.me/072198bf