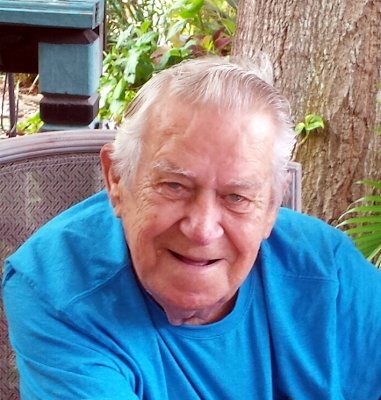 Obituary of Robert A. Ryder, Sr.

Bob had many jobs throughout his life. He served as a cook and chef early in his Navy career during the Korean War. Upon retiring from the Navy, he participated in numerous entrepreneurial occupations. He moved his family to Florida in 1973 where he spent his remaining years enjoying life. He was a member of the American Legion and the Loyal Order of Moose.

Bob lived a simple life. He loved to travel, fish, paint, and tinker with crafts. In his later years, he enjoyed spending time with his friends at Long Doggers on Post Road. Those who knew and loved Bob, will always remember his kind and loving spirit.

Bob was predeceased by former wife Dorothy, his daughter Theresa, and all of his siblings. He is survived by daughter Elizabeth (Kim), sons Robert Jr. (Tina), Scott (Cindy), and Todd (Jeneen). He was loving Gramps to Sharde, Ashley, Christa, Aaron, Kim, Cheyane, Josh, and Kiya. He also is survived by eight great-grandchildren.

Graveside service will be held on Saturday, June 26, at 3:00 PM at Florida Memorial Gardens in Rockledge, Florida.

To send flowers to the family or plant a tree in memory of Robert A. Ryder, Sr., please visit Tribute Store

Share Your Memory of
Robert A.
Upload Your Memory View All Memories
Be the first to upload a memory!
Share A Memory
Send Flowers