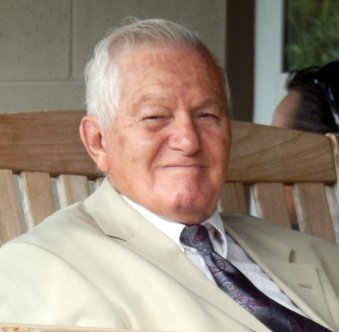 William “Bill” Johnson was greeted in Heaven by his loving wife Alma on February 24, 2021. Bill is survived by their four children: Sandra Wesley, Patricia Noll, Lisa German and William “Bill” Johnson II. Bill has 8 grandchildren and 13 great grandchildren. He was born and grew up in Warner Robbin, Georgia and served in the United States Navy and Navy Reserve. After his tour in the Navy, he married Alma Newman in 1956. Bill has a surviving brother, Marion Johnson, who resides in Texas.

Bill, Alma, and the family lived in Reidsville, North Carolina and then moved to Florida in 1962. Over the years, Bill worked for Pan Am at Kennedy Space Center, the Southern Gun Exchange, and he retired from L3 at Patrick Air Force Base. He received several commendations for his service including one from the Department of Defense for investigating the Challenger tragedy. He was a union representative and until the time of his death enjoyed luncheons with his former co-workers.

Bill was an outstanding example of a husband, father, grandfather, and great-grandfather. As his young family grew up, activities always involved the family and church.  It was not uncommon to have the youth church group meetings and dinners at his home. He played on the church softball team and loved to cook at the on ground church fish fries. Fishing was his favorite hobby, which he enjoyed while “down range” at Ascension, in the Bahamas, the Florida keys, and even in the Indian River.

Bill was a friend to all!  Even in his eighties, Bill enjoyed helping neighbors and family with lawn work and other miscellaneous repairs. He loved the challenge.

Bill was a devoted husband, loving father and grandfather as well as a “true patriot” who loved his family, his country and his God. He is now and will continue to be truly missed.

To send flowers to the family or plant a tree in memory of William Johnson, please visit Tribute Store

Share Your Memory of
William
Upload Your Memory View All Memories
Be the first to upload a memory!
Share A Memory
Send Flowers