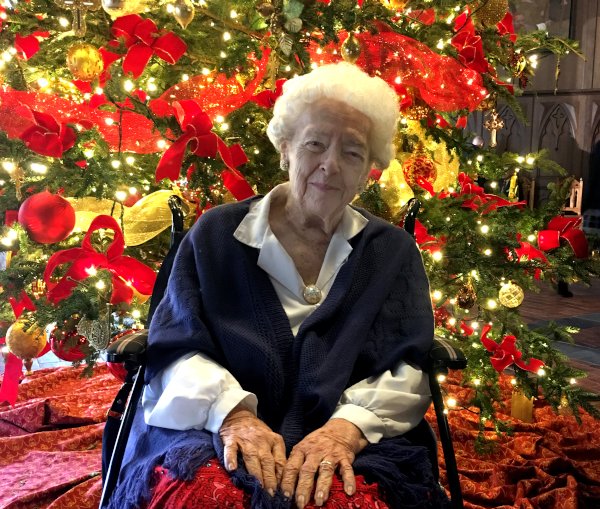 Hannah Nancy McNey Schealer answered the call of her Creator and Savior just before midnight on 30 December 2020. Departing the presence of her family, Nancy joined her husband, Richard Burns Schealer, in the New Jerusalem, where he had been awaiting her company since 19 October 2013. The cause of her passing was living a full life from 4 March 1928 until the final days of 2020.  Her spirit was indeed willing to leave her flesh, which had grown increasingly weaker over those well-lived nine decades.  As Nancy stated, employing her sweet but often direct humor just a few weeks before her thoroughly earned transition to Glory, “I’m just surprised He hasn’t pulled the plug by now.”

Yet, while Nancy Schealer was ready, her expansive family was certainly not!

Nancy Schealer departs as the Grand Matriarch of 76 cherished souls she considered most precious, just as they deemed her their own inestimable treasure.  Nancy leaves behind five wonderful daughters and a favorite son: Sally Ohaneson, Martha Smith, Susan Austin, Claudia Chamberland, Vicky Whitley, and Mark Schealer. These are accompanied by four totally awesome sons-in-law and a favorite remarkable daughter-in-law: Michael Ohaneson, John Austin, Dennis Chamberland, Barry Whitley, and Lydia Schealer.  From these individuals, her legacy includes 22 grandchildren, 40 great-grandchildren, and 3 great-great-grandchildren.

It is, of course, impossible to encapsulate such an extraordinary life into something as inscrutable as an obituary, even though it is often attempted.  Yet, the task was significant enough to those who knew her and for those who loved Nancy so deeply that her novelist son-in-law was assigned the great privilege of etching a few paragraphs into the record.  Thus, herein lies a smattering of phrases that humbly attempt to scratch the surface, recording with all the brevity of a graveside epitaph an astonishing life that made such a profound difference to so many other humans.  How does one indeed even begin to adequately frame a whole life with a few strokes of a pen? Especially words arranged with the expectation of somehow persisting into perpetuity that sufficiently describe a truly exceptional life overflowing with such extravagant grace toward so many? Can a short run of ordinary phrases even begin to outline how Nancy Schealer so deeply and so profoundly influenced the lives and wellbeing of family, friends, and a host of strangers who will never even know her name – so many whose lives were made better just because she lived?

Ralph Waldo Emerson said, “To know even one life has breathed easier because you have lived. This is to have succeeded.”  There were so many lives that Nancy Schealer touched, and so many people – men, women, and children – who retired at the end of their difficult days, night after night, breathing easier because Nancy Schealer loved them with the powerful love of Christ.  Her living, breathing faith was thus expressed through her works of love – a love wholly energized by her special touch that was driven so impressively by individual, stunning expressions of grace.  It would be impossible to enumerate the list that lives only in the heart of God, Who recorded every single one.

If you go to the vast global catalogue of the internet and search for H. Nancy Schealer, you would find nothing notable outside of the family pages. And yet, when it becomes possible, and the great book of lives in the Kingdom Heaven is finally opened for all to review, her name – and her invisible and extensive work of eternal significance for so many – will be prominent and quite obvious.  That is why 1 Peter 3:4 is the verse selected for her lasting memorial as it best defines her and her life’s greatest strength as… “…the hidden person of the heart, with the imperishable quality of a gentle and quiet spirit, which is precious in the sight of God.”

You can trace Nancy’s legacy of quiet strength and determination to make a difference in her world back to her early years at the onset of a great world war.  It began by a young teen lady learning to fly and becoming a World War II aviatrix before she even learned to drive an automobile or graduated from Boyertown High School in 1946, leading to her devotion to others as a Registered Nurse from the Hospital at the University of Pennsylvania, and then as a full-time mother to her six children.  She was an Audubon Society member, involved with wildlife rescue, translator of books into braille, added her lovely alto voice to the local chorale, was an avid undersea explorer, passionate devotee of fishing, and a magnificent cook. She was a generous, loving friend to her family, to those who easily befriended her, and to those less fortunate who needed her touch, which she freely and compassionately gave.  For many years, Nancy was a financial supporter of many causes she found closest to her heart, notably meeting many Veterans’ needs, Law Enforcement, Children’s Hospitals, and medical charities, as well as Native American schools and homes.

Yet, the most astounding and remarkable characteristic of her life was the gentle grace she expressed through her existence each day. Her family never heard her utter an unpleasant word to her husband throughout their 63 years together and would be hard pressed to cite an example of her speaking ill of anyone. She truly epitomized the Proverbs 31 woman, from its opening question to its final analysis: “Who can find a virtuous wife? For her worth is far above rubies. Her children rise up and call her blessed; her husband also, and he praises her: ‘Many daughters have done well, but you excel them all.’”

As Nancy is laid to her well-earned rest, she leaves behind not just a robust lineage but a profound legacy of joy and hope for so many.  And, of the most deeply significant of all her bequeathed treasures given to us who remain, Nancy left the greatest gift she had to give to all those whom she loved most – her legacy of faith.  We receive from her example the sure and confident model of a life lived to honor and reflect her greatest treasure – Jesus Christ, her Lord Master. Nancy would be the very first to reveal to anyone who wished to listen that her footsteps and the trace of her path through this life were accompanied by the Shadow and Footprints of her Savior, from Calvary’s cross to the glittering gates of the New Jerusalem that now features her among its citizens.

Nancy Schealer spent every day of her life preparing for this ultimate journey that commenced just before the dawning of 2021, beginning the second phase of a new existence that has no end at all.  But while we already miss her with a painful intensity on this side of eternity, we are so happy she is once again with her beloved husband Richard, and with her Jesus. Today, Nancy is experiencing her new body that comes with an infinite warranty and has no broken or worn-out parts. And there, right about now, she is walking hand in hand with Richard along the broad avenue of transparent gold, coming to terms face-to-face with the great promise: “Things which eye has not seen and ear has not heard, and which have not entered the human heart, all that God has prepared there in that place for those who love Him.” For, indeed…

Join us in celebrating her life at:

To send flowers to the family or plant a tree in memory of Hannah McNey Schealer, please visit Tribute Store

Share Your Memory of
Hannah
Upload Your Memory View All Memories
Be the first to upload a memory!
Share A Memory
Send Flowers
Plant a Tree