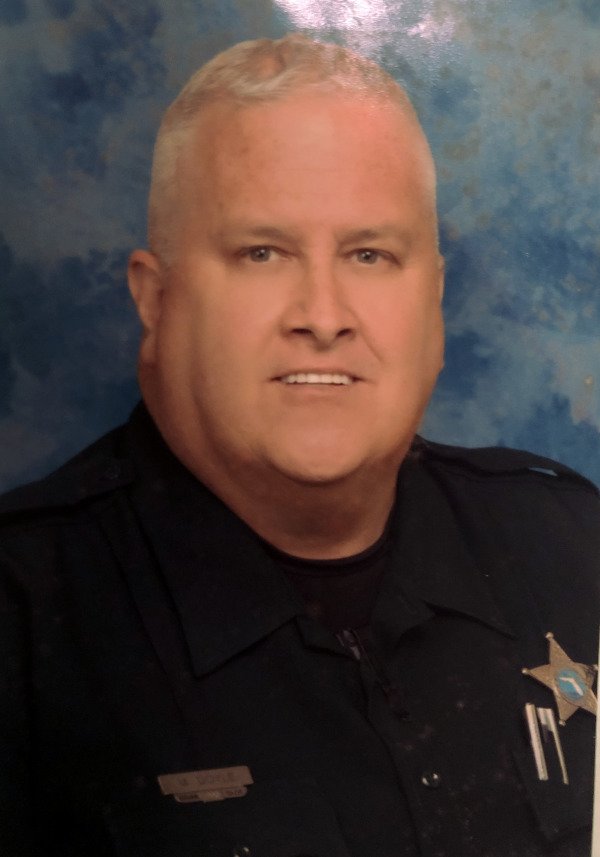 Michael joined the Lord’s Army of Angels after a valiant three-week battle with Covid at Palm Bay Hospital.

Mike, who was born and raised in Philadelphia, Pennsylvania, served in the U.S. Army as a Military Police Officer with 511th MP Company in Fort Drum, N.Y.  In 1989, Mike relocated to Palm Bay, Florida with his loving wife, Debra and oldest son, Michael Jr.  Their family grew when Matthew was born in 1990 and daughter, Jessica, 1995.

During his years building his life in Palm Bay, Mike served 29 ½ years with the Brevard County Sheriff’s Office (BCSO). Deputy Doyle’s assignments spanned the length of Brevard County, which included patrolling Barefoot Bay, Micco communities, BCC Police Academy Instructor, and numerous summers as a Camp Chance Counselor. Other duties included Patrol, D.A.R.E. Instructor, Community Policing, Police Athletic League (PAL), and Basketball Coach of BCSO Enforcers. His favorite time as a Deputy, was being assigned as the School Resource Officer at Hoover Middle School, where Mike coached the Girls’ and Boys’ Basketball Team. He served from 2009 through 2018. Mike was recognized as Employee of the Year at Hoover in 2012. Mike was recognized as Deputy of the Month numerous times during his tenure, finishing his commendable career at the County Courthouse before retiring on July 3, 2019.

Mike relished coaching PAL and Palm Bay Recreation basketball for all three of his children’s teams. Coach Doyle, AKA, “Captain America”, touched countless lives and formed lasting relationships with many of the youth in the county. Mike relished any time he spent with his family, including vacations in Tennessee, Maryland and Pennsylvania.

Mike was preceded in death by his Mother, Marie, Father, Bernard and brother Bernard Jr.

A Celebration of Mike’s Life will be held on Friday, December 11th at 4:00 p.m. at Hoover Middle School 2000 Hawk Haven Dr., in Indialantic.

To send flowers to the family or plant a tree in memory of Michael Gerard Doyle Sr. , please visit Tribute Store

Share Your Memory of
Michael Gerard
Upload Your Memory View All Memories
Be the first to upload a memory!
Share A Memory
Send Flowers