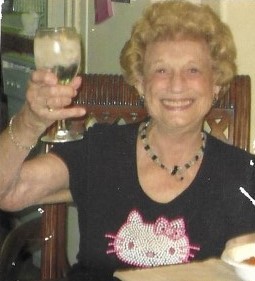 Jeanne Parks of Indialantic,Fl. crossed the bar, as Alfred Lord Tennyson would have said, on October 5, 2020, one month shy of her 101st birthday. She was born in 1919 on November 15th to a kind, loving couple in Brooklyn, N.Y. She had a brother, Bob, her only sibling, who predeceased her.

She married her high school sweetheart, Dick Kriete. They wed just before he entered the Air Force. Lt. Col. Kriete was responsible for instructing new pilots on how to fly their aircraft on Linc Trainers. Demanding national readiness schedules meant they had to move every few months to a different U.S.A.F. base. She used to say ”I lived everywhere” and she meant it.

Jeanne is survived by her son, Richard. Lt. Kriete who served as a commissioned officer in the U.S.N.R. assigned to the Military Sea Transport Service during the Viet Nam Conflict. He shared Jeanne’s love of travel and animals. Richard and longtime partner Mary moved to Indian Harbour Beach from Manhattan Beach, California to be with Jeanne in her last five years.

Jeanne and her then husband decided to buy a second home in Indialantic. She loved her little beach cottage and spent a lot of time here before she ended up moving here full time. She met her third husband, George Parks, who worked on The Shuttle Program at Patrick Air Force Base. He shared Jeannie’s profound love for animals and they dedicated much of their time and treasure to helping the animals in Brevard County. When she first noticed that they had no animal shelters and very few clinics for animals in Brevard she decided to take action. She and her husband started the first animal shelter and they also started a not-for-profit clinic to provide low-cost spaying and neutering for animals.

Over the years they helped many people take good care of their animals and they also helped many veterinarians start their own practice by providing work for them while they were building up their practice and getting to know people in the community.

After George passed she continued to be very socially active in the community and help animals in any way that she could. She used to feed the feral cats and trap them and spay them in order to slow down the pet population. She had a small army of volunteers who were very loyal and did good work together.

She was also an avid Bridge player and played @ The Bridge Studio. Front Street and Wickham Park.

I, Valentina Boonstra, am sure that when she passed there were many cats and dogs that helped her over the Rainbow Bridge and showed her around Heaven. I feel privileged that I was friends with her for thirty years. She was encouraging to me when I started my massage career at 25 yrs. old. I took care of her for ten years, every morning and evening.

We will miss you Jeanne, but are glad you are free of the pain.

In lieu of flowers please send donations in her honor to: floridawildlifehospital.org.

To send flowers to the family or plant a tree in memory of Jeanne Parks, please visit Tribute Store
Print
Share A Memory
Send Flowers