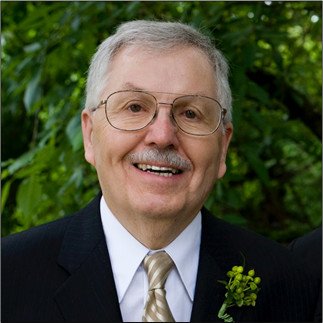 Bruce graduated from Washington High School in 1951.  Right after graduation, Bruce joined the U.S. Navy as his patriotic duty during the Korean War.  In fact, all three Hann men reported for duty in the Korean War:  Dad in the Navy, serving in the Seabees; Bob in the Army, serving stateside in communications; and Bruce in the Navy, serving as an aircraft mechanic.   Bruce was stationed primarily in San Diego, California and in Atsugi, Japan, with Mt. Fugi in the background.  Bruce’s squadron maintained the AJ-1 Savage aircraft, a carrier-based medium bomber built for the U.S. Navy by North American Aviation.  The aircraft was designed shortly after World War II to carry atomic bombs, making the AJ-1 Savage the heaviest aircraft thus far designed to operate from an aircraft carrier.  Bruce served briefly on aircraft carriers, the U.S.S. Oriskany and the U.S.S. Yorktown.

After four years in the Navy, Bruce attended St, Louis University, Parks College of Engineering and Aviation.  It was here that Bruce was invited to attend a Bible study with students, sponsored by InterVarsity Christian Fellowship.  Bruce developed a hunger and love for God’s Word and gave his life to Christ, who guided the rest of his life.  Bruce graduated with a Bachelor of Science in Aircraft Maintenance Engineering but never worked in that field.  Bruce had offers for employment but chose instead to follow his heart and became a Field Director for InterVarsity Christian Fellowship in upper New York State.  He served as Field Director for 5 years, visiting small groups of seekers at Cornell, Julliard, and many other colleges and universities.  When he was invited to join the staff of Malone College in Canton, Ohio.  He served for 2 years as Residence Counselor for Men, living on campus with lovable but rowdy students.

In the summer of 1967, Bruce moved to Fuller Theological Seminary and studied Greek in the dormitory overlooking Pearl’s on-campus apartment.  Pearl worked in the business office at Fuller and waited on Bruce numerous times that summer.  Within time Bruce and Pearl developed a very good friendship.  Bruce and Pearl were married on December 28, 1968 and this marriage endured over 51 years.

On August 14, 1970, Bruce and Pearl welcomed the birth of their son, Mark Stephen Hann.  Bruce was a kind father to Mark, encouraging him in every way possible.

Bruce’s love affair with God’s Word lasted until dementia robbed his brain of the ability to study and process information he read.  Bruce’s year at Fuller Theological Seminary in Pasadena, CA and another year at the Mennonite Brethren Biblical Seminary in Fresno, CA, deepened his love for and knowledge of the Bible.  For many years, Bruce taught Discipleship Classes and Sunday School classes, sharing his love and knowledge of Scripture.

Bruce had a secondary passion that also lasted a lifetime, aeronautics.  Bruce and Mark visited many aircraft museums and airshows learning about all kinds of aircraft.  Bruce’s favorite plane was the North American P-51 Mustang, always wanting to look at the mechanical engineering under the hood.

This love of aircraft ultimately grew into a fascination and love for the Space Industry.  In fact, Mark encouraged his parents to relocate to the Space Coast, particularly the Melbourne area, related to their mutual love of space.

In 2007, Mark announced to his parents that he had met the woman of his dreams.  Bruce and Pearl immediately fell in love with Amy Marie Adams, daughter of  Bob and Jessie Adams, and her yellow Labrador, Sunny.  Amy and Mark were married on June 1, 2008, the happiest day of Bruce’s life.

In God’s time, Bruce became a long-awaited grandpa, affectionately known as “Bapa,” named by first grandchild, Bowman.  Since then Frank joined the family and Libby was born in Dec. 2018.  Bruce thoroughly enjoyed being Bapa.

As evidence of the wonderful daughter-in-law Amy is, she and Mark invited Mark’s parents to consider living with them in a new multi-generational home.  Imagine living with your mother-in-law!  July 14, 2018 that dream became a reality.  What a blessing it has been to hear those little grandchildren’s voices every day.

Bruce suffered multiple unusual health conditions, including Blepharospasm, involuntary spasms of the eyelid muscles.  That’s why Bruce frequently looked like he was squinting or had his eyes closed.  In addition, he had only 15% of his vision left due to glaucoma.

In 2011, Bruce fell and hit his head.  In late 2012, he was diagnosed with hydrocephalous, associated with the fall, that caused shuffling and walking difficulties.  In early 2013, Bruce had brain surgery to insert a VP shunt, a medical device that relieves pressure on the brain caused by fluid accumulation.  While his gait improved, he never fully regained his light footstep.

Bruce has been blessed with more than eight decades of life.  Sadly, Bruce spent his 87th birthday in the hospital.  But, after 54 days, Bruce was discharged with hospice care and was able to enjoy his last Christmas with his grandchildren.

Finally, Bruce is survived by sisters-in law Angie Sinner and Dorothy Peterson and husband John and many members of his extended family of marriage.

Bruce had a long, well-lived life, focused on themes of mercy and justice.  He had a genuine concern for those who were lost, forgotten, disadvantaged, discriminated, and hopeless.  Bruce looked forward to spending eternity in heaven, not because he was a good person, but because he believed the mystery of God’s promises of eternal life.  This hope was made possible by Jesus’ love that paid for his sin by willfully giving his life on Calvary’s cross.  Bruce will be sorely missed but we have assurance he now has fully restored vision, a healthy brain, and can walk again without the help of a cane or walker.  He knows no pain, no tears, and knows only joy in the triune Presence of God the Father, Jesus Christ the Son, and the Holy Spirit.

Share Your Memory of
Bruce
Upload Your Memory View All Memories
Be the first to upload a memory!
Share A Memory
Plant a Tree