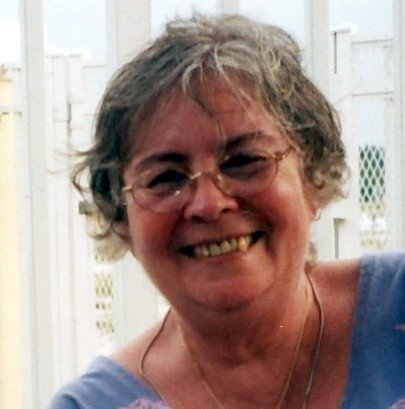 Virginia "Ginger" (Smith) Hines, passed away on Thursday, 20 August 2020, at her home in West Melbourne, FL.

She was born on February 9, 1943, in Poughkeepsie, NY. She was the daughter of the late Samuel D. Smith and Dorothy M. Smith.

She is survived by her husband of almost 56 years, Edward, of West Melbourne, FL; son Matthew Hines of Palm Bay, FL; son Eric Hines and his wife Catherine, and granddaughters Erin and Emily of Concord MA; an "honorary granddaughter", Kristina Morales, of Concord NC, and many nephews and nieces.

She was preceded in death by her brother, Mark Smith, of Grand Junction, CO.

She joined the US Air Force and underwent training at Amarillo, TX. She was then assigned to administrative duties at Tacoma, WA. She married Edward there, and accompanied him on assignments to numerous locations in the continental US, Alaska, and Germany.

She worked as a bookseller and florist at several locations. She was president of an Officer's Wives' Club in Germany. She was also an active member of many volunteer organizations and social organizations, a church vestry, the Daughters of the King Society, and the Red Hat Club.

She was an avid reader, with a deep interest in subjects like archeology, European history, art, and fiction; and typically read about one book a day. She enjoyed travelling in Europe, cooking, art, her family, and especially, being with her granddaughters. She was a deeply caring person, who could always be counted on to help people in need, and was remarkably generous to several charities. She could love just about any cat or dog. She will be deeply missed by her family and many friends.

A celebration of life ceremony will be held at a future date.

In lieu of flowers, donations may be made to Doctors Without Borders, one of her favorite charities.