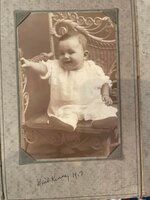 Gail Kinney Griffin died peacefully in her sleep on May 29, 2022, at the glorious age of 105. She was born in her parent's home on Bay Street in Fellsmere, FL in 1917, where she lived until she left for Tallahassee, where she attended Florida State College for Women, now Florida State University, to study music education. After graduation, she taught music for seven years with her last years in Apopka. It was there that she met her future husband, JJ Griffin, Jr. to whom she was married for 47 years until his passing in 1993.

Gail was an amazing woman who led a remarkable life of which books could be written. She traveled the world many times over often sharing stories about her many adventures. She was an accomplished pianist and shared her musical gifts well into her 80's. She and her good friend, Nola Mahaffey, enjoyed putting on duet recitals for many years. Gail helped found the first public library in St. Cloud. She was a 75-year member of the PEO Sisterhood where she enjoyed serving in various capacities. She supported her husband throughout his career and his service in the Florida House of Representatives as well as his serving as the first Mayor of Lake Buena Vista. Above all, the most important things in her life were her family and her relationship with the Lord.

A celebration of life will take place at 1:00 P.M. Friday, June 24th, at Eastminster Presbyterian Church, 106 N. Riverside Drive, Indialantic, FL 32903. In lieu of flowers, donations can be made to PEO Foundation, 3700 Grand Ave., Des Moines, Iowa 50312. In the memo line write "for the VRSF in the memory of Gail Griffin." The funds will go to Brevard women needing college scholarships.