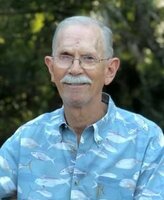 John was born in Paxton, FL to Johnny and Bessie Marrell on March 22, 1942. At the age of 17, John joined the Marine Corps, where he spent the next 4 years serving his country. In 1965, John joined Radiation as a Maintenance Mechanic and worked for the next 33 years as a highly regarded Staff Engineer for Harris Corporation. During those 33 years he traveled to locations around the world installing satellite communication equipment. The last 10 years of his career, he worked at the Range Operation Control Center at Cape Canaveral where was essential in leading the Power and Ground team. John completed his Master of Electrician certificate during this time.

John enjoyed working in the yard, traveling, and spending time with his extended family and friends. With his wife JoAnn, they spent many years traveling the country in their company, took a 10-day trip to Alaska and another 10-day trip to Costa Rica. One of their favorite places was the Florida Keys. They also took many cruises including the Eastern and Western Caribbean, but one that stood out was going to Bermuda. During the last 5 years, they also spent many weekends at Disney World, where he selfishly went along for JoAnn. He also attended many country concerts with his wife and family.

A Celebration of Life will be held Thursday January 6th from 3-6 P.M. at Camp Holly, one of his favorite places for 50 years.

In lieu of flowers, please donate in memory of John Marrell to one of these organizations that helped us thru the last six months: Health First Aging Services Clinic, Sarah Care Adult Day Services or Health First Hospice Care.