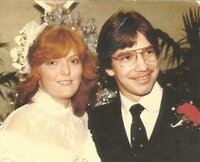 Laura “Laurie” Ann (Blalock) Congrove, 60 of Rockledge, Florida  passed away peacefully on October 9, 2021. In May of 2019, Laurie was diagnosed with ovarian cancer which she battled with grace and tenacity. She was born on October 27, 1960 on Sheppard Air Force Base in Wichita Falls, Texas. Laurie was predeceased by her father, Richard Leland Blalock Sr.; her brother, Dennis Carl Blalock; her daughter, Jennifer Ann Congrove; and her sister in law, Louise Ann Blalock.

Laurie attended school in Martin County, Florida and was a student at Hyles-Anderson College in Crown Point, Indiana. She married the love of her life, David, on December 17, 1982. They raised their two children in Rockledge, Florida where many precious memories were made. She enjoyed spending time with her family, traveling, cruises, attending college football games and movies, and was an avid reader. Laurie attended Beacon Baptist Church in Jupiter, Florida which will hold a celebration of life in her honor on Saturday, October 23rd beginning at 11 a.m.

The family wishes to express their heartfelt appreciation to her many friends and extended family members who prayed for her, sent well wishes, and cared for Laurie. May God bless you all.