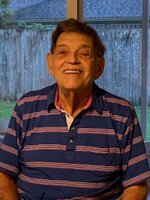 Rodolfo Luis Palombo, lovingly known as Rudy by his family and close friends, passed away August 22, 2021. He was 85, although he would always transpose numbers, so he would say he just turned 58.

Born in Argentina, he graduated from the University of La Plata in the capital of Buenos Aires. After he graduated, he moved to the United States to be with his older brother and his family. He later became a U.S. citizen. He had worked as an engineer for Davy Powergas in Lakeland. Florida. He then worked as a consultant for several companies in Florida, Oklahoma, New York, and South Carolina before planting roots in Melbourne, Florida, where he was Public Works Superintendent for the city of Cocoa until his retirement.

He is survived by his dear friend Luz Palombo, his nieces, Vivian Dinsmore of Melbourne, Carol Linville of Lakeland, and Jean Gonzalez of Lakeland, and his nephews in Argentina, Yoyi and Nestor Laguillo, along with great-nieces and great-nephews both in Florida and in Argentina.

Rudy was a wonderful man who will be dearly missed, especially his sense of humor, beautiful smile, big heart, and kind eyes. We love you VERY MUCH, Tio Rudy, and you will always be in our hearts!