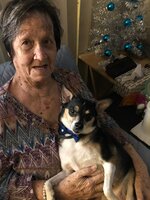 She was born January 25, 1944 in Topeka, Kansas, the daughter of Henry and Wilma Sams.

Henrietta went to Hayden High School and married Geoffrey N. Mann Jr. shortly after graduating high school.  They lived all over the US and ended up in Melbourne, Florida, where they moved when Geoff started at Radiation, now L3 Harris Technologies.  She had several different jobs throughout the years but was best known for watching children and volunteering at her children's schools.

No services are scheduled at this time.