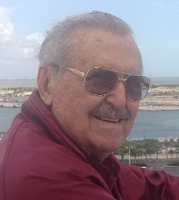 Carl Bernard Freitag, Jr., 89, died peacefully on August 9, 2021 at his home in Melbourne, Florida with his wife Joyce I. McQuilkin by his side. His wit, wisdom and intellect were enjoyed by all who knew him. The world has lost a kind, warm, generous, decent man who will be sorely missed by his family and friends.

Carl had careers in military service and academia. During his two tours in the U.S. Air Force he initially served as a navigator and flight engineer and then headed a training detachment in West Germany. In the reserves he was a recruiter for the Air Force Academy. After retiring from the Air Force with the rank of Lieutenant Colonel he earned his masters in psychology from Baylor University and his doctorate from the University of Georgia. He was a longtime professor of psychology at Middle Tennessee State University in Murfreesboro, Tennessee specializing in gerontology and death and dying.

Carl was also an extremely accomplished artist, muralist and essayist and an avid reader. His art graces homes and offices and often focused on aviation subjects. His murals can be seen in several restaurants in Murfreesboro and also in the children's room at the Eau Gallie Public Library in Melbourne. Many of his thought-provoking essays reflected his humanist orientation and were shared with his Second Monday of the Month Book Club.

Born September 6, 1931, in Buffalo, New York, Carl was the son of Carl B. and Mary Freitag. He is survived by his wife, Joyce I. McQuilkin, and his children, David Freitag of Tucson, Arizona, Stephen Freitag of Palm Springs, California and Leslie Belfanti of Keizer, Oregon. He was predeceased by his first wife, Billie Freitag, and brothers, Thomas and Norman Freitag. Interment will be at Arlington National Cemetery at a later date.