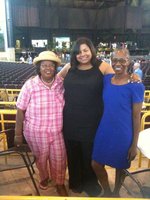 In 1974, while pregnant with her only child, TIMIKA “KING” WATKINS (Clifton R. Watkins, Jr.) Dove “L.A.” Holmes walked up to her and said What is a pretty girl like you doing here? Veronica replied “What business is it of yours?” She turned around and two were soul mates were United. Dove told Veronica when you have your baby name her Timika, I have a daughter named Tameca so name her after her. Veronica said “How do you know I’m pregnant?” Dove said well your belly is big, your belly button is poking out and you can’t zipper your pants.” She smiled and they went their separate ways. 20 years later these twin flames were reunited in Gettysburg, Pennsylvania at the Black and White Ball when Dove asked Veronica did you name your daughter Timika. Veronica looked at him skeptically and said how do you know my daughter he said I’m the one who told you what to name her in 1974. They have been together ever since, married February 12, 1999. Her family of two became a blended, loving family of 15. Throughout her life she wrote a song and it was recorded by an artist in the late 1970’s, she went to UDC in Washington, D.C. for nursing, she wrote and self published a book of poems, she lived life to the fullest and her smile lit up any room she walked into. She’s best known for her finger snapping dance moves and loved singing with her husband and music and her very large family. She is preceded in death by her father, step-father, and six siblings and 8 grandchildren. Her legacy will continue to live on through her mother Mary Alice King, 84, of Biglerville, PA, husband Dove Holmes, 66 of Cocoa and her 13 children, 17 grandchildren, 5 great-grandchildren and a host of family members across the world and two best friends Jackie Tuff of Gettysburg, PA and Marsha Proctor of Washington, D.C.