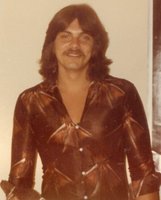 He was the husband of Rita Jeanette (Hutson) Jackson. They shared 46 years together.

Mike was born in Festus, Missouri. He was the son of Martha and Bill Jackson. He went to Festus School. He was employed at Painters Local Union for over 45 years, as a professional painter.He was a member of New Fellowship Baptist Church. Mike was a collector… of everything! mini liquor bottles, cars, watches, R.C. Cars, knives, guns, beard oil‘s; one of his favorite collections are bonsai trees, all shapes, all sizes! He will most definitely be remembered for his smile, and he never met a stranger; and he was the classiest man around. Very kind hearted, loving!

He is survived by his wife, no children on earth, but in heaven! And his dog, Fergie! Also survived by his sister, Sheila Maria (Jackson) Williams, and his nephew, Zachary Michael Vernon.

The memorial service is to be announced.

Memorial contributions, in Lieu of Flowers can be made to the SPCA.