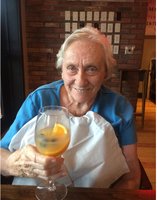 Trudy Maurer Russo, 95, of Cocoa Beach Florida, passed away on June 30, 2021 at Cape Canaveral Hospital with family at her side.

Preceded in death by her loving husband of 56 years, Joseph S. Russo, as well as her dear longtime friends and relatives. She will also join all the beloved dogs to whom she gave her heart during her lifetime.

Trudy was born on April 5, 1926 in Vallendar, a small town on the Rhein River in western Germany. She lived through World War II, eventually working in an army hospital when she was old enough to serve. After the war, she followed her adventurous spirit to Columbia, South America and then went on to fulfill her dream of immigrating to the United States, where she later met her husband. She enjoyed gardening, collecting antiques, traveling, and sailing. She supported many worthy causes, including animal rights and rescue and numerous environmental efforts.

A celebration of life and interment at Canaveral National Cemetery is being planned for this coming fall.