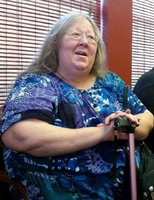 Carolyn Ann Nuckols was born in Miami Beach Fl, she and he sister Connie moved often as children, and at the age of 17 she married the love of her life, Ed Nuckols. One of their first stations was in New Mexico, where a son, Eddy was born. Just under 3 years later, another son, Jeremy was born. Shortly after this, Ed was diagnosed with Multiple Sclerosis. During their time in the air force the family lived in New Mexico, Colorado, and New Hampshire, and after medically retiring the family returned to Colorado. The family lived in Colorado for many years and Carolyn thrived as a wife and mom. Family day trips to local amusement parks such as Heritage Farms or historic parks such as Hiwan Homestead Park were a regular occurrence, and many weekend days were spent wandering Red rocks or small cities in the foothills of the Rockies. The family joined Westland Baptist Church in Littleton, Colorado where the entire family was very active, down to the boys who would often appear in Children’s Choir presentations. In 1989 the years of snow shoveling had taken their toll, and the Family moved to Melbourne Florida. After just a few years in Melbourne, Ed expressed a desire to live in his childhood home state of Virginia, so Carolyn packed everyone up and away they went. Two years of cloud cover was enough time in Virginia, and Carolyn brought the family back to Melbourne in 1993. Again, Carolyn led the family in becoming very active in their Church, as well as the boys school that was attached to the Church. She loved to volunteer (along with Ed to provide art classes to the younger grades at the boy’s school). Carolyn and Ed especially enjoyed time volunteering with the Florida Children’s home, building lifelong friendships and shaping their sons’ strong beliefs in helping others. During this time Carolyn and Ed built their dream home in Palm Bay Florida. Carolyn’s faith and determination ensured their family prospered, even as Ed’s health was slowly fading. After Ed passed, Carolyn found joy with her friends, family, children, and Sister Connie. When her grandchildren and grandnephew came into his world, Carolyn found incredible joy and was arguably the proudest grandma! Carolyn had a profound impact on many people in her daily life, whether through her lighthearted sense of humor and laughter, her willingness to listen to anybody without judgement, or her desire and willingness to help anybody she met. Carolyn is loved and remembered by many, including her sister Connie, her Sons Ed and wife Roberta; Jeremy and wife Jamie; Nephew Mike and wife Emily, Aunt Jeanne, Uncle Lloyd and wife Judy, Cousin Debbie and husband Tom, Grandchildren Evan and Aidan, Grandnephew Lochlan, and many other friends and Family. Memorial Services will be held at 2:00 p.m. on Saturday, June 16th at Ammen Family Cremation and Funeral Care, 950 Malabar Rd SE, Palm Bay 321-724-2224.