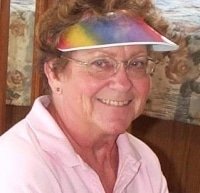 Ruby was born Ruby Haynes in Lynn, Massachusetts on June 19 1941. Her family including two older brothers moved to St. Petersburg when Ruby was just 12 years old. After finishing high school, she went to work at the Minneapolis Honeywell plant in St. Petersburg where she met her soon-to-be husband, Phil. After marrying in September of 1961 and becoming Mrs. Ruby Hooper, she and her new husband moved to Charleston, South Carolina. Then soon after her son was born in Charleston, the couple returned to Florida where Phil was involved in the space program. Ruby raised her son and over the years also served on the staff of several local craftsmen and in the offices of a number of area doctors. After both Ruby and Phil retired they became involved with a motor home group and enjoyed taking RV trips throughout Florida and in the North Carolina mountains. Ruby was a sweet soul, was much loved, and will be deeply missed by all her family and friends. Ruby is survived by her husband Phil and son Charles (Chip) Hooper, brothers Charles(Buddy) and Larry as well as cousin Deeva Mootsie.Services will be private. Arrangments by Ammen Family Cremation & Funeral Care, Rockledge,632-1350.